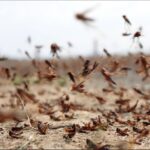 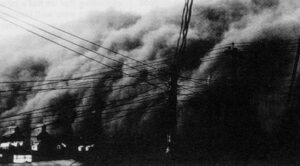 No matter where you live, I’m sure you have had encounters with grasshoppers. They are an unfortunate fact of life in this world. Some years are worse than others, and some areas are worse than others too. There are a few facts about grasshoppers that I didn’t know about, and some I did. Unfortunately, there are no chemical pesticides to control grasshoppers, but since cool, moist conditions slow them down and encourage the growth of fungi (which cause disease in grasshoppers), keeping plant beds moist and well irrigated may help ward them off. To protect small areas, try using a sticky paper or screening. Most of us find that in dry hot years, the grasshoppers make us as miserable as the heat. Never was that more evident than on July 26, 1931, when a swarm of grasshoppers descended on crops throughout America’s heartland, devastating millions of acres. Iowa, Nebraska, and South Dakota were already suffering from a bad drought that brought severe damage to the crops in the region. The grasshoppers really just finished them off.

Anyone who has grown a garden, crops, trees, and even grass, have struggled to prevent insects from eating their crops or plants. Locusts and grasshoppers, which are insect cousins, are among the most feared pests. If the conditions are right, their populations can suddenly explode, and while just their presence is enough to make most people’s skin crawl, the speed with which they are able to eat through a field of crops is impossible to comprehend, unless they have witnessed it for themselves. A plague of these insects occurs when drought conditions cause their populations to suddenly explode. The egg pods don’t do well in wet conditions, so when the soil is very dry, swarms can develop. “They explode from beneath your feet. There’s sort of a rolling wave that forms out in front of you. They hit up against your body and cling against your clothes. It’s almost like being immersed in a gigantic living being,” says Professor Jeff Lockwood of Wyoming.

The swarm in July of 1931 was so thick that it actually blocked out the sun. The grasshoppers had to be scooped up with a shovel. They ate the cornstalks down to the ground, leaving just stubs, and they ate 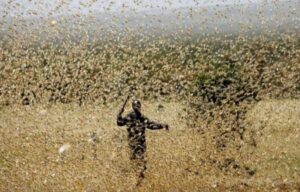 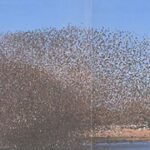 everything in the fields, down to the bare ground. Thankfully, the United States hasn’t seen swarms since the early 1930s. Many other areas of the world are not so fortunate. North Africa and parts of the Middle East continue to experience problems with insect swarms. In fact, the swarms in some of those areas have involved as many as a billion bugs. I don’t know about you, but now my skin is really crawling. Eeeeeeewwwwwwww!!