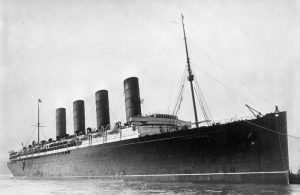 Most people have heard of the Titanic sinking, and how disaster could have been prevented, had they just slowed down, listened to the warnings, and had they had enough lifeboats. There is, however, another ship sinking that not so many people have heard of, or if they had, they didn’t pay much attention to. It is the Lusitania. Like the Titanic, the sinking of the Lusitania could have been prevented too, had a number of simple precautions been taken, such as not to sail at all that fateful May day in 1915.

RMS Lusitania left New York for Britain on May 1, 1915, unfortunately during a time when German submarine warfare was intensifying in the Atlantic. On February 4, 1915, Germany had declared the seas around the United Kingdom a war zone, and the German embassy in the United States had placed newspaper advertisements warning people of the dangers of sailing on Lusitania. Not to defend the Germans, but they had warned people that they would attack all ships, military or passenger. Unfortunately, not many people boarding Lusitania that morning had time to read the paper before embarking on their journey. It amazes me that it was left to the people, who were told that the ship could outrun the German U-boats. They were also told that they

The sinking of the Cunard ocean liner RMS Lusitania occurred on Friday, May 7, 1915 during the First World War, as Germany waged submarine warfare against the United Kingdom which had implemented a naval blockade of Germany. The ship was identified and torpedoed by the German U-boat U-20 and sank in just 18 minutes, and also took on a heavy starboard list. The Lusitania went down 11 miles off the Old Head of Kinsale, 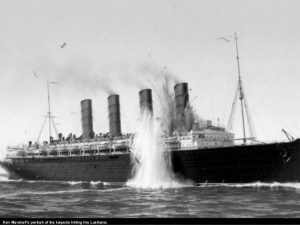 Ireland, killing 1,198 and leaving 761 survivors. The sinking turned public opinion in many countries against Germany, and it was a key element in the American entry into World War I. The torpedoing and subsequent sinking became an iconic symbol in military recruiting campaigns. The injustice of it brought about the outrage that would likely cause soldiers to enlist. Still, the United States did not immediately enter into the war. The American government first issued a severe protest to Germany…a waste of time really. Then, following immense pressure from the United States and recognizing the limited effectiveness of the policy, Germany abandoned unrestricted submarine warfare in September 1915.