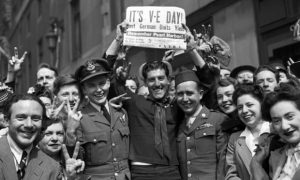 World War II was finally winding down. Germany had surrendered. Japan was still a problem, but they were losing their strength too. Hitler committed suicide on April 30, and now it was over for Germany. I fact, it was time for celebration. So on May 8, 1945, both Great Britain and the United States celebrated Victory in Europe Day. The day would come to be known as V-E Day, and cities in both nations, as well as formerly occupied cities in Western Europe, put out flags and banners, rejoicing in the defeat of the oppressive Nazi war machine.

That was 75 years ago today that the first V-E Day was celebrated. It is hard to believe that it was 75 years ago. I wasn’t born then, of course, but over the years of researching World War II, I almost feel like those events were just yesterday. Researching World War II bought the events…good, bad, and horrific to life for me. Our men and women, as well as those of the Allies were brave and noble people. They were fighting against two oppressive regimes, both of whom had murdered their own people and the people of the nations around them. The Nazi war machine had marched through Europe, terrorizing the people around them. The Luftwaffe planes bombed many cities, taking no concern for the civilians lost. Life meant nothing to them…except for their own. Hitler was greedy for power, and wanted to bring Nazism to the whole world. Thankfully they were stopped before they could complete their reign of terror.

German troops throughout Europe finally laid down their arms on May 8, 1945 in Prague. The Soviets had lost 8,000 soldiers by the time of the surrender, but the Germans had lost considerably more. They laid down their arms too, in Copenhagen and Oslo, at Karlshorst, near Berlin, in northern Latvia, and on the Channel Island of Sark. The German surrender was almost complete in that final cease-fire. More surrender documents were signed in Berlin and in eastern Germany.

The main concern of many German soldiers was to elude the grasp of Soviet forces, to keep from being taken prisoner. About 1 million Germans attempted a mass exodus to the West when the fighting in Czechoslovakia ended, but were stopped by the Russians and taken captive. The Russians captured approximately 2 million 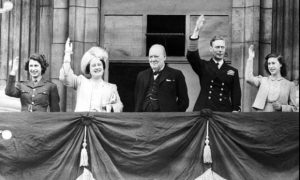 prisoners just before and after the German surrender. At the same time. 13,000 British soldiers were released and sent back to Great Britain. Of course, there were still pockets of confrontations into May 9th, and the Soviets lost an additional 600 soldiers in Silesia before the Germans finally surrendered. Those skirmishes pushed back the V-E Day celebration until the ninth in Moscow, with a radio broadcast salute from Stalin himself, “The age-long struggle of the Slav nations has ended in victory. Your courage has defeated the Nazis. The war is over.” It was a great day for all the people of the Allied nations, and the people of the world, with the exception of the Germans, Japanese, and the Axis nations. Good over evil.