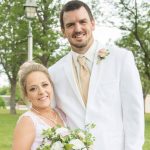 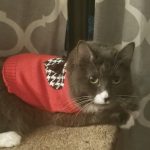 Nick Olsen became my grandnephew when he married my grandniece, Siara this past summer. Nick is perfect for Siara. They love to laugh, and they are always doing funny things. Nick loves to make people laugh, and he has a funny, sarcastic way to do just that. That is something I like. I find comedic sarcasm to be extremely fun, and I like when people are able to laugh at themselves. That describes Nick perfectly. He’s usually up for whatever goofy things Siara wants to do. I think his joking ways were probably in large part one of the things that attracted Siara to him in the first place.

Nick is a hard working man, who takes good care of his wife, and will someday make a great dad, I’m sure. He came from a big family, with 6 siblings, and he loves his mom very much. I’m sure he will want to have his own family. Nick and Siara already have two fur babies, Forest and Emma…their cats. Siara tells me that Nick is obsessed with Emma, and she’s not too sure he doesn’t love the cat more than he does her, but I don’t think so. Nick can fix just about anything, and so he keeps things in their house in good repair. He also likes to “surprise” Siara with a very clean house when she gets home from work. Now that makes him a pretty rare sort of a guy, and a keeper for sure.

Nick and Siara’s dad, Dave Balcerzak have bonded quite well over sports, as well as everything else. They 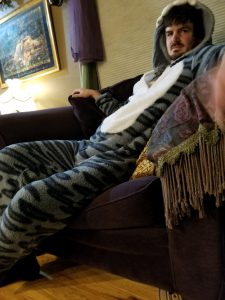 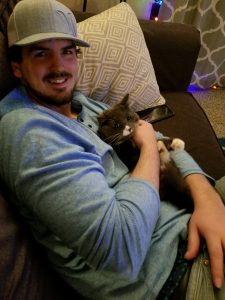 really enjoy getting together to watch the football games. Nick’s favorite team is the Seahawks, but Siara and Dave’s is the Steelers. I’m not sure how that works while watching the games, but they seem to be able to deal with their differences, and the games they spend time watching together are mutually fun for everyone…unless the two teams are playing against each other, that is…then it’s probably war!! Even if they were playing against each other, I’m sure that there would be some good natured ribbing, especially from the winner, but they would still be good friends, and that’s great, because Siara loves her daddy and her hubby, and she loves that they get along so well. Today is Nick’s birthday. Happy birthday Nick!! Have a great day!! We love you!!