Last June while my husband, Bob and I were walking on the path near our home, we noticed a friend’s vegetable garden. Since it had gone from plowed dirt to medium sized plants, virtually over night, we knew that they had put in plants and not planted seeds. This conversation brought a memory to Bob, about his childhood years. The garden that they had on the land that his parents, Walt and Joann Schulenberg shared with his grandparents, Robert and Nettie Knox was quite large, and Bob remembers checking the garden almost daily to see if the seeds they had planted had begun to sprout. He and his grandpa would go out into the garden and young Bob would see something green in the places where the seeds had been planted. He would immediately ask, “Is that a plant Grandpa?” Only to be disappointed when his grandpa said, “No, that’s a weed.”

I was struck by the memory of my husband’s grandfather, who wasn’t really a social person most of the time, but when he was in the garden…well, he was really in his element. I could picture Grandpa and young Bob out in the garden, while he worked to educate his grandson on the finer points of gardening. Grandpa knew how to do many things, but it was in the garden that he really seemed at home. As a younger man, he worked on several ranches and so being in the outdoors, working with his hands makes sense. I don’t suppose that many men seriously enjoy gardening, and I don’t know if I can really picture Grandpa in a flower garden, but when it came to a vegetable garden, he took great pride in it and in the food it supplied to the family. 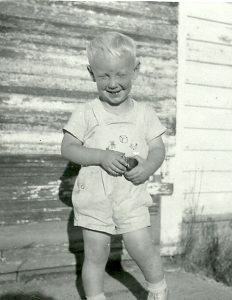 When the vegetables were ripe, he would pick them and the canning would commence. I remember, after I joined the family, the canning taking place. It took all day, but when we were done, there were vegetables to last for the year. I can’t say that canning was always one of my favorite things to do, but there was always a certain satisfaction that came from opening those vegetables to serve for dinner, and knowing where they came from. The nice thing about having Grandpa handling the garden was that truly, he did all the hard work, and we reaped the benefit. I say that because I am not really a green thumb, so gardening and especially weeding are not my idea of a pleasant afternoon. Nevertheless, that was most certainly Grandpa Knox’s idea of a pleasant afternoon, ad it was a very nice memory of him. Today would have been Grandpa’s 109th birthday. Happy birthday in Heaven Grandpa Knox. We love and miss you very much.