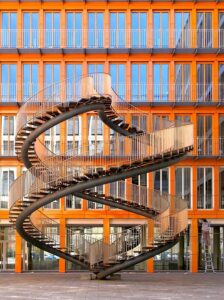 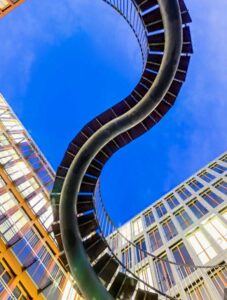 Is it art or is it an exercise machine? I suppose it depends on your perspective. The strange staircase that doubles as a beautiful piece of art is located in the courtyard of an office building in Munich, hidden from public view for the most part. At first glance, it looks like a spiral staircase that is…just a little bit odd looking…like it’s a double staircase. Then a staircase seemingly leads you up…to nowhere, aaround and back to the bottom again. “Umschreibung” is not really a staircase at all. It’s actually an ominous sculpture by Danish artist Olafur Eliasson. “Umschreibung” is a German word which means “euphemism,” or “circumlocution,” the second of these made sense to me because the structure is repetitive, but the first definition didn’t, because an alternative just didn’t fit. The “Umschreibung” web site translates it to “circumscription” or “periphrasis,” meaning “a movement without destination, a space defined by motion rather than walls.” That idea is interesting and much like exercise equipment, because that is what a treadmill or exercise bike does.

The 30-foot-tall sculpture is made of steel. Basically, it is a staircase in the shape of a double helix. At the bottom of the staircase there is a small opening. It’s just the right size for an entrance, so you can actually climb the stairs yourself. I don’t know if that is allowed now or not, but it looks like it was once or is 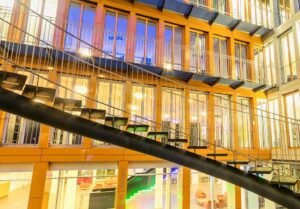 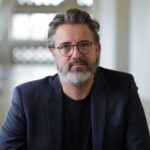 sometimes. The view I saw of it has a small chain on each side of the entrance as a way of closure. If it is not allowed, I think it is a really sad thing. A staircase is meant to be climbed. The “Endless Staircase” is, as I said, located in the courtyard of an office building, and I suppose that the people who work in those offices would eventually get used to the beautiful structure just outside the window, but for me, I think I might have trouble with my imagination…especially if I was allowed to climb it once. I would want to climb it every day, maybe several times a day. There is just something about the idea of climbing a stairway that doesn’t end.

The structure was designed and built by a man named Olafur Eliasson, who is an Icelandic–Danish artist known for sculptured and large-scale installation art employing elemental materials such as light, water, and air temperature to enhance the viewer’s experience. He was born in Copenhagen on February 5, 1967, to Elías Hjörleifsson and Ingibjörg Olafsdottir. After his parents divorced when he was 8, he lived with his mother and his stepfather, a stockbroker. His father, who was by then an artist, moved back to Iceland, where their family 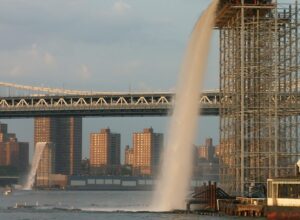 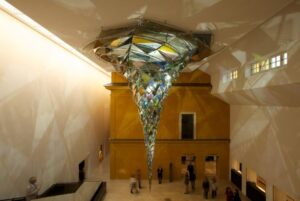 spent summers and holidays. Taking after his father, Olafur had his first solo show at 15, exhibiting landscape drawings and gouaches at a small alternative gallery in Denmark. From there, his work grew and expanded into abstracts, which is where his fame came from. The “Umschreibung” was designed and built in 2004. Another of his cool structures is the New York City Waterfalls, and there are many others too.