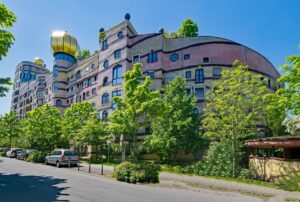 We have come to expect apartment buildings to look pretty much the same. There might be a few structural differences, but basically the idea is small homes stacked on top of each other, so that multiple families can be housed is a relatively small space. These days I have seen more buildings that look almost like very large houses, mansions even, but the reality is that they buildings house many families, and the apartments are rather cookie-cutter and plain.

One building…the Waldspirale, which means forest spiral in English, is not just another random residential building. Designed by Friedensreich 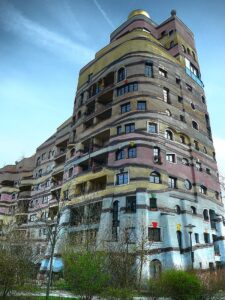 Hundertwasser, this architectural wonder located in Darmstadt in Germany. Construction began at the end of 1990s and was completed in 2000. This building is no ordinary structure. The U-shape of the building is characterized by unique multicolored facade and lack of straight lines. The plan was to make sure that no other building looked quite like this one. The inside of the building is just as unique as the outside. The inner wall corners are rounded to match the outer walls of the building. The building has 105 apartments, a garage, and a playground for children…with a tiny artificial lake…much more than the average apartment building in the 90s. The building is really irregularly shaped, and while it seems short, the highest point of the building goes up to the 12th floor. That is all interesting, but what I find the most interesting is that not one of the 1000 windows in the building are the same and the handles on the doors are also different. Imagine just finding 1000 different windows and probably as many different doors too. 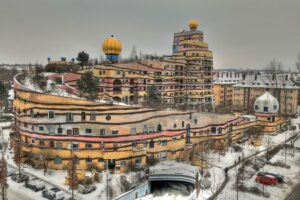 While it was designed by Austrian artist Friedensreich Hundertwasser, it was planned and implemented by architect Heinz M Springmann and constructed by the Bauverein Darmstadt company. I’m sure the uniqueness of the building, while somewhat simple to design, would take a lot of planning and the structure would take some special planning to make it stable enough to carry out the structure as it was designed the uniqueness of the plan. Since I, like many other people have watched the DIY channels, I know that the more unique the structure the more work goes into making it stable. While some people might consider it weird to live in such a building, I think it might be kind of fun.