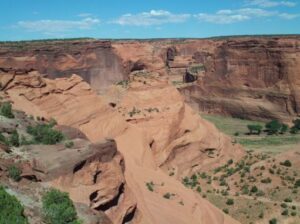 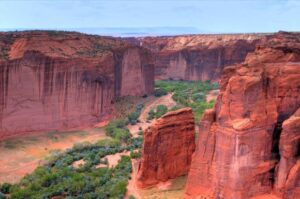 Arizona…home of the Grand Canyon and Monument Valley, is famous for its red dirt and colorful formations, but these places aren’t the only famous places in the area. In fact, the Canyon de Chelly National Monument, which is located in Apache County, Arizona, and is in the current day Navajo Nation, is one of the most visited national monuments in the United States. The strange thing is that there are many people who have never heard of it…me included, and I have been to the Four Corners region. I guess that at the time my family went there, the Four Corners (the spot where four states meet) was more interesting to us. Or maybe it was that we were headed to the Grand Canyon. Anyway, I had not heard of the Canyon de Chelly. My older sister, Cheryl Masterson might find that amusing, and might even tell me that we have been there, but for some reason, if we have been there, I don’t recall.

The name, Canyon de Chelly is an unusual name for the United States, even in the Southwest. It sounds a bit French, but in reality, it is universal Spanish. “Chelly” is actually derived from the Navajo word tseg, which means “rock canyon” or “in a canyon.” Spanish explorers and government officials began to utilize a “Chelly,” “Chegui,” and even “Chelle” in order to try to replicate the Navajo word in the early 1800s. Eventually, the name was standardized to “de Chelly” by the middle of the 19th century. It is thought that the canyons of de Chelly contain the artifacts and homes of Native Americans as far back as 5,000 years. At first, they lived in caves and the only real evidence of their existence is the hieroglyphics etched into the red rock walls. These people were more nomadic, and so only visited the canyons while on hunting expeditions.

Later the people who lived there were more established, and so began the period of time when the adobe structures were formed. I think that anyone who has seen adobe home, in pictures or in person would have to admit that they are very interesting. It seems so amazing to me that these people could not only make a structure that could withstand the elements as well as these structures have, but to build them on the face of the cliffs is even more amazing. Adobe, of course, is a type of construction material made from a mixture of mud, straw, and water. It is commonly used in hot, dry climates, such as in the southwestern United States. Like any home, renovation took place over the years, strengthening and changing the structures. The structures have names such as Standing Cow (named for the hieroglyphic white bull on the wall above the home), white house (so named because of a white wall in the back of the structure), Mummy Cave (I don’t believe any mummies were found there, so I’m not sure how it got its name), and Antelope House (named for the hieroglyphic carvings of antelope above it). The homes in Canyon de Chelly were abandoned around 1300, although no one really knows why. Over the past century, archaeologists, historians, and scientists have tried to pinpoint the root causes of the massive abandonment of settlements like Hovenweep, Chaco Canyon, and Mesa Verde, but there is no single consensus among experts. It might have been due to warfare, severe drought, food shortages, infectious diseases, or the emergence of new religious and cultural centers. Whatever the 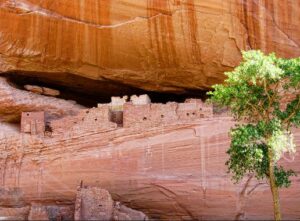 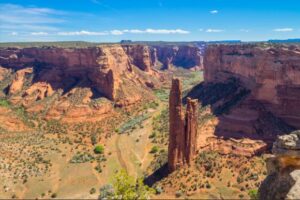 reasons, Canyon de Chelly’s people left the area and migrated south toward the more fertile Rio Grande Valley in present-day New Mexico or toward the Little Colorado River Basin in what is present-day Arizona. That is known because of the homes built in the same fashion in the Pueblos of New Mexico, the Zuni, and the Hopi Indian areas, where the structures still have the rich traditions in artistic and architectural design.