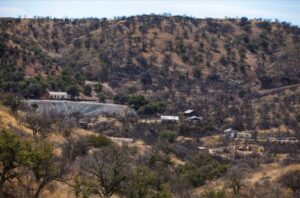 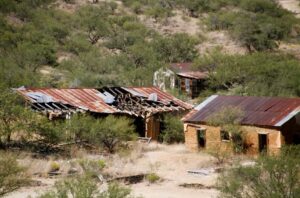 Lots of mining towns started out when someone discovered gold, silver, or some other precious metal. A few of them have continued to produce enough “treasure” to maintain and even rapidly grow a town. Others fizzled in a short time, or even a long time, but when the mines dried up, the towns went with them. Because of that, there are numerous ghost towns that dot the United States…and probably other nations too.

Ruby, Arizona is a ghost town in very near the Arizona-Mexico border. It is one of the best-preserved ghost towns in the state. In the 1700s, rich minerals were discovered there by the Spaniards, but they were not rich enough for their tastes, so only a limited amount of placer mining occurred before they moved on, leaving the area largely undisturbed for nearly a century, until two mining engineers, Chares Poston and Henry Ehrenberg, 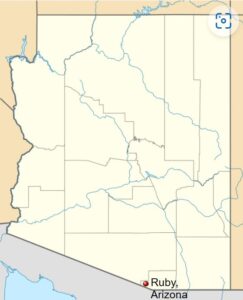 revived the old Spanish placers in Montana Gulch in 1854. With the discovery of rich veins of gold and silver, which the Spaniards had somehow missed, came other prospectors looking for their own rich strike. While the area was rich in gold and silver, it also had Apache Indians, and they were…hostile, to say the least.

Nevertheless, mining did proceed starting around 1877. Ruby, Arizona was founded as a mining town in Bear Valley, originally named Montana Camp. It was so named because the miners were mining at the foot of Montana Peak. The Montana mine produced gold, silver, lead, zinc, and copper…peaking in the mid-1930s. While never a large town, Ruby had a population of about 1,200 people. The post office was established on April 11, 1912, by the mining camp’s general store, Julius Andrews. When Andrews named the post office “Ruby,” after his wife, Lille B Ruby Andrews, and the mining camp became known as Ruby. The post office closed on May 31, 1941.

The town of Ruby has been through some wild times, and never was that more evident than the years between 1920 and 1922, when the town and the area surrounding Ruby was the scene of three double homicides known as the Ruby Murders. The largest manhunt in the history of the Southwest followed the crimes, and it included the first airplane ever used in an Arizona manhunt. The town’s most prosperous period was in the late 1920s 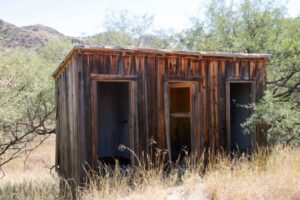 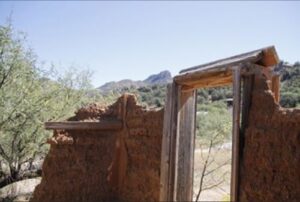 and 1930s, when the Eagle-Picher Mining Company operated the mine. They also upgraded the camp. The Montana mine was the leading lead and zinc producer in Arizona from 1934 to 1937. In 1936, it was third in silver production. Nevertheless, it seems, in mining anyway, that “all good things must come to an end” and so it was with the mine, which closed in 1940. By the end of 1941 Ruby was abandoned.