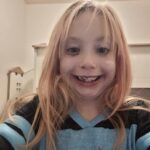 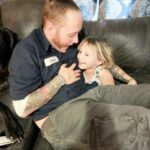 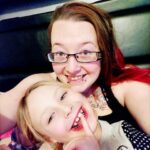 My grandniece, Izabella Harman has a personality that far exceeds her small stature. She is full of smiles and always happy. Her mom, Melanie Harman, says that she is growing into her personality, but I think that such a big personality will take a little time to for her to grow that much. Izabella “Belle” has such a bubbly personality, and that is pretty hard to contain.

Belle is so very sweet. As she has grown, she has become rather protective of her mom. She doesn’t want her to work too hard. So, Belle has designated herself as “Momma’s Helper.” She makes sure that Melanie doesn’t 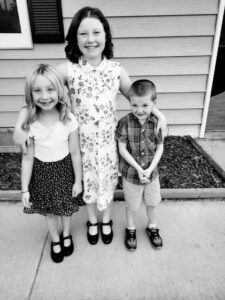 carry too many things at once. If Melanie has a large load of stuff she is carrying, Belle says “No, no Momma!! You have too much stuff!! Give me that!!” Being a helper is one of her top priorities, and while he mom is her top priority, she doesn’t limit herself to helping just her mom. Her teacher says she is so very sweet and helpful with other kids in class. She loves doing her schoolwork, which isn’t always a common thing. In fact, she loves it so much that she gets irritated when other kids around her are distracting her from doing her work. It is rare to see such a dedicated student, but then, Belle isn’t just your average student.

Bell loves her siblings, and she is so sweet to Alice and Jaxx. She loves being around them. Belle has never stopped being a Daddy’s Girl though!! Her daddy, Jake Harman is her hero!! When she wants him, she squeals, “Daddy, Daddy, Daddy, Daddy!!” What dad wouldn’t just melt when his girl does that. She tells him in no uncertain terms that he is the greatest dad ever.

Belle has been taking Karate, and her Sensei is always telling her aunt, Siara Kirk just how awesome Belle is. While Belle is becoming a “lethal weapon,” she is also the most loving girl. She loves having “Girls’ Days” with her Aunt Siara and her grandma, Chantel Balcerzak. Sometimes they just hang out, and sometimes they 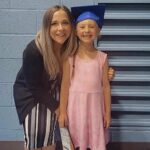 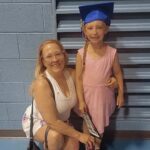 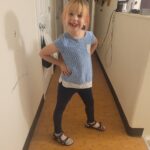 workout. She also loves playing video games with her grandpa, Dave Balcerzak too. She is the light of their lives. On a funny note, Belle likes to say “Yo and Bro” a lot and her Aunt Siara thinks that’s so funny. Her family is so important to her, and that makes her a very special girl. Today is Belle’s 7th birthday. Happy birthday Belle!! Have a great day!! We love you!!