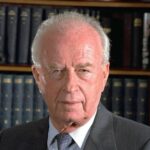 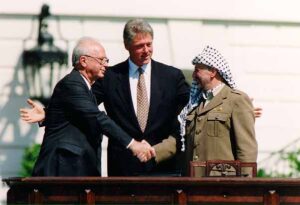 Since time began, people have hoped for peace, and ended up in a battle. While “world peace” will likely never be an option, at least not in this world, governments continue to try, and those who oppose peace continue to do their best to sabotage the plans for peace. Israel has often been at the center of the battle for peace, which makes no logical sense. The other Arab nations have long been after the land, small as it is, that belongs to Israel. I never understood how they could covet the small piece of land that Israel had. The reality is that the Arab nations simply don’t want Israel to exist at all.

In 1995, a rally was being held in support of the Oslo Accords at the Kings of Israel Square in Tel Aviv. A number of people had warned Yitzhak Rabin, the fifth prime minister of Israel, that his life could be in danger, but he would not back down. The Oslo Accords was a pair of agreements between Israel and the Palestine Liberation Organization (PLO). The Oslo I Accord was signed in Washington DC, in 1993. The Oslo II Accord was signed in Taba, Egypt, in 1995. The problem with these agreements is that the battle between these two groups goes so much deeper than just who owns the land. These nations are related and have been in a feud since the time of Jacob and Esau in Biblical days. Nevertheless, nations have tried to bring about peace between the two nations ever since the battle began.

On November 4, 1995 (12 Marcheshvan 5756 on the Hebrew calendar) at 9:30pm, at the end of the rally. An Israeli ultranationalist named Yigal Amir, who radically opposed Prime Minister Yitzhak Rabin’s peace initiative, and particularly the signing of the Oslo Accords, took it upon himself, to assassinate Yitzhak Rabin. The Likud leader and future prime minister, Benjamin Netanyahu, told Rabin’s government that withdrawing from any “Jewish” land was heresy, which I would have to agree with, because the land had been given to them by God. They believed that Rabin was probably too secular and too far removed from the Biblical Jewish tradition and Jewish values, but assassination is never the answer.

Conservative rabbis associated with the settlers’ movement prohibited territorial concessions to the Palestinians and forbade soldiers in the Israel Defense Forces from evacuating Jewish settlers under the accords. Some rabbis proclaimed “din rodef” based on a traditional Jewish law of self-defense, against Rabin personally, arguing that the Oslo Accords would endanger Jewish lives. The whole situation, which was “designed” to bring “peace,” took on a completely different tone…chaos. While I would never condone violence or assassination, I 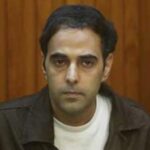 don’t think Israel should ever be forced to give up parts of its land, and unfortunately, any peace agreement with the Palestinians always includes taking Israeli land, when Arab land is already far, far bigger. During the trial, Amir admitted to the assassination of Yitzhak Rabin and claimed that he was justified in doing so, saying that Amir he was “satisfied” and was acting on the “orders of God.” Following the trial, Amir was sentenced to life imprisonment for the murder of Rabin.