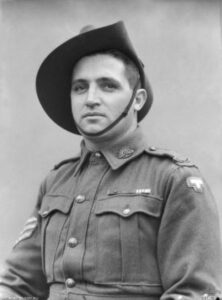 Lieutenant Thomas “Diver” Derrick was one of the 2/48th Battalion of the Australian 9th Infantry division battalion’s most decorated and beloved soldiers, serving in Australia’s most decorated unit in World War II. He was the best of the best, but it was after one event that he actually gained notoriety. Derrick was born on March 20, 1914, at the McBride Maternity Hospital in the Adelaide suburb of Medindie, South Australia, to David Derrick, a laborer from Ireland, and his Australian wife, Ada (née Whitcombe). The Derricks were poor, and Tom often walked barefoot to attend Sturt Street Public School and later Le Fevre Peninsula School. In 1928, aged fourteen, Derrick left school and found work in a bakery. By this time, he had developed a keen interest in sports, particularly cricket, Australian Rules Football, boxing and swimming; his diving in the Port River earned him the nickname of “Diver.”

Derrick’s notorious accomplishment came during the Battle of Sattelberg in New Guinea in November 1943. His battalion…the 2/48th was participating in the fight. Over a period of two hours, the Australians made several attempts to clamber up the slopes to reach their objective, but each time they were repulsed by intense machine gun fire and grenade attacks. As dusk fell, it appeared impossible to reach the objective or even hold the ground already gained, and the company was ordered the men to retreat. That order brought about an unusual response in Lieutenant Derrick, who was quoted as saying, “Bugger the CO [commanding officer]. Just give me twenty more minutes and we’ll have this place. Tell him I’m pinned down and can’t get out.” With that, then Sergeant Tom Derrick hoisted the Australian Red Ensign at Sattelberg, New Guinea. He moved forward with his platoon, and Derrick attacked a Japanese post 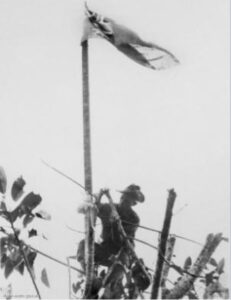 that had been holding up the advance. He quickly destroyed the position with grenades and ordered his second section around to the right flank. The section immediately came under heavy machine gun and grenade fire from six Japanese posts, but that didn’t stop Derrick. Clambering up the cliff face under heavy fire, Derrick held on with one hand while lobbing grenades into the weapon pits with the other. Someone said he was like “a man…shooting for [a] goal at basketball.” Derrick climbed further up the cliff and in full view of the Japanese, he continued to attack the posts with grenades before following up with accurate rifle fire. True to his word, within twenty minutes, he had reached the peak and cleared seven posts…all while the demoralized Japanese defenders fled from their positions to the buildings of Sattelberg. I suppose that if the maneuver had ended differently, Derrick might have been punished for disobeying the order of his commanding officer, but as it was, how could they discipline him for such a one-man-show of prowess.

Following his successful one-man-attack on the enemy, Derrick returned to his platoon, where he gathered his first and third sections in preparation for an assault on the three remaining machine gun posts in the area. While the platoon was attacking the posts, Derrick personally rushed forward on four separate occasions and threw his grenades at a range of about 8 yards, before all three were silenced. Derrick’s platoon held their position that night, before the 2/48th Battalion moved in to take Sattelberg unopposed the following morning. I’m sure that brought a level of shock to the commanding officer, who had expected a much different outcome and a much different enemy the next morning. The, then proud, battalion commander insisted that Derrick personally hoist the Australian flag over the town. It was raised at 10:00am on November 25, 1943. 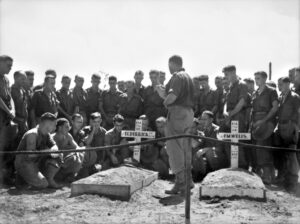 The final assault on Sattelberg was later dubbed “Derrick’s Show” within the 2/48th Battalion. Derrick was already a celebrity within the 9th Division, but this action brought him to wide public attention. I suppose that could have been seen as just Derrick’s irritation over the retreat, but it also could have and was taken as disobeying an order. Derrick had advanced on multiple Japanese machine gun positions, uphill through the jungle, while under covering fire from his squadmates…and he did it by himself. In all, he cleared out 10 enemy positions, helping his unit accomplish their objective and receiving the Victoria Cross for his efforts. Unfortunately, Derrick was killed late in World War II, suffering grievous injuries at the Battle of Tarakan in May 1945.