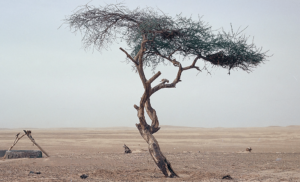 As a child, I remember that when we were on a road trip, we would look for a lone tree. We thought it was fun to find a tree that had managed to grow in a place that was so far away from other trees. Of course, before long, we realized that most of these trees that we thought were “lone” trees, had “friends” just over the top of a hill. Every once in a while, however, we found a tree that for all intents and purposes looked like a true “lone” tree. We called it that if we couldn’t see another tree, within our view, but there is a tree that apparently really qualified as a “lone” tree. It was called the Tree of Tenere, and it was located in Niger’s Sahara Desert.

The Tree of Tenere was a very old tree. In fact, for roughly three centuries Niger’s Sahara Desert was home to the tree, which was widely believed to be the most isolated tree on the planet. Apparently, this lonely acacia tree was the only tree for 250 miles. The tree was well known and was even used as a much-needed landmark by countless desert caravans for generations. When traveling across the desert, with nothing to use for guidance, it would be easy to get lost. The tree proudly showed the way across, keeping many a traveler from ending up as a casualty of the desert.

One day, the most horrific and truly shocking event happened. The Tree of Tenere got hit by a truck. It was in 1973, and it is assumed that it was a drunk driver who managed to plow into the only object for hundreds of miles while following an old caravan route. There was simply nothing else out there. It almost makes you wonder how the drunk driver (or whoever it was) could have managed to hit that particular spot. It was like 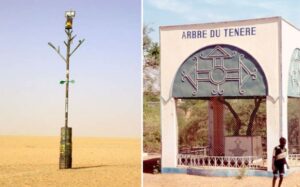 hitting a needle in a haystack. Hundreds of miles of desert sand, and one small tree. Nevertheless, hit it they did, and the spindly little tree was snapped in half. Most likely, the drunk driver didn’t even know he had hit anything. Whatever the case may be, the important little, truly “lone” tree was dead. So important had it been that the acacia’s dried trunk is now on display in the Niger National Museum, and a statue memorializing the natural wonder has taken its place in the remote desert. The landmark was too important to lose it. It is said that here is a silver lining though. It is now officially impossible to be accused of bad driving in Niger’s Saraha Desert, because “Hey, at least I didn’t kill that tree.”