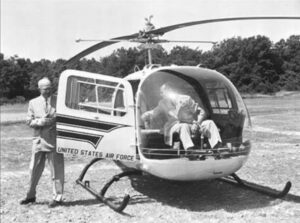 There have been many firsts that our United States Presidents have been able to celebrate. One such first was “the first president to ride in a helicopter.” That particular first honor went to a well-known general turned president…Dwight D Eisenhower. On July 12, 1957, President Eisenhower became that first United States president to fly in a helicopter when a United States Air Force H-13J-BF Sioux, serial number 57-2729 (c/n 1576). The helicopter was piloted by Major Joseph E Barrett, USAF. It departed the White House lawn for Camp David, the presidential retreat in the Catoctin Mountains of Maryland. Of course, no presidential trip happens without a Secret Service agent, also on board. On that same day, a second H-13J, 57-2728 (c/n 1575), followed the first, this one carrying President Eisenhower’s personal physician and a second Secret Service agent.

While that first flight was really a pleasure ride, the main purpose of the helicopter was to rapidly move the 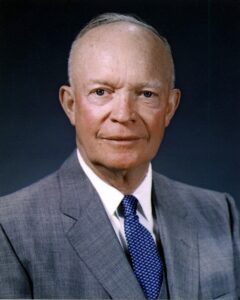 president from the White House to Andrews Air Force Base where his Lockheed VC-121E Constellation, Columbine III, would be standing by. This was intended to be a way of escape to Andrews or to other secure facilities in case of an emergency. Major Barrett was selected as the pilot because of his extensive experience as a combat pilot. They needed someone who was a capable pilot under pressure, a skill that Major Barrett proved he possessed during World War II, when he flew the B-17 Flying Fortress four-engine heavy bomber. Major Barrett was credited with carrying out a helicopter rescue 70 miles behind enemy lines during the Korean War. For his heroics, he was awarded the Silver Star.

Not only was the helicopter a great way to quickly secure the president, but that original pilot was the perfect person to make sure that the president was safely transferred to that secure location. The President of the United States is always in a degree of danger. It goes with the territory I suppose. It is the job of his security details is to make sure that no threats are ever able to be carried out. They are very loyal and would die to protect the president. 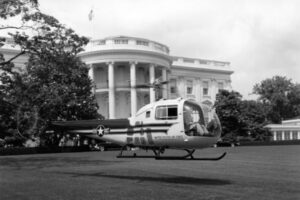 The Bell Helicopter Company of Fort Worth, Texas, manufactured two of the helicopters. They were delivered to the Air Force at Wright-Patterson Air Force Base on March 29, 1957. The two presidential H-13Js were nearly identical to the commercial Bell Model 47J Ranger. They were capable of carrying a pilot and up to three passengers. An enclosed cabin was built on a tubular steel framework with all-metal semi-monocoque tail boom. The main rotor was 37 feet 2 inches in diameter and tail rotor was 5 feet 10.13 inches, making the helicopter an overall length of 43 feet 3¾ inches with rotors turning. It stood 9 feet 8 inches and weighed 2,800 pounds.