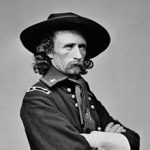 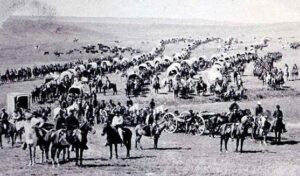 There was so much controversy over the control of the Black Hills. The Indians were told that the White man would stay out of the Black Hills, but when gold was discovered there, all bets were off. Before his defeat at the Battle of Little Big Horn, while he was still a Lieutenant Colonel, George Custer rode with his crew to the Black Hills of South Dakota in search of a location for a fort. That Custer Expedition of 1874 became a defining moment in the story of the Black Hills coming under the control of the United States. Things really got started in 1872, when Secretary of the Interior Columbus Delano, basically set the stage for the expedition to the Black Hills. Delano was responsible for the Sioux territorial rights in the region. Delano sent a letter dated March 28, l872, which stated, “I am inclined to think that the occupation of this region of the country is not necessary to the happiness and prosperity of the Indians, and as it is supposed to be rich in minerals and lumber it is deemed important to have it freed as early as possible from Indian occupancy. I shall, therefore, not oppose any policy which looks first to a careful examination of the subject… If such an examination leads to the conclusion that country is not necessary or useful to Indians, I should then deem it advisable…to extinguish the claim of the Indians and open the territory to the occupation of the whites.”

It was the beginning of major trouble in the Black Hills, because Delano’s remarks were in direct contradiction of terms defined in the 1868 Laramie Treaty which states: “…no persons except those designated herein … shall ever be permitted to pass over, settle upon, or reside in the territory described in this article.” Delano singlehandedly broke the treaty with the Indians and blew up the situation in the Black Hills. Basically, he thought the Indians wouldn’t see the value in the Black Hills that he saw…gold. Well, the gold didn’t interest them, but the land did. Delano stated that the major reasons for exploration was that “Americans and representatives in Dakota Territory felt that there was too much land allotted for too few Sioux (estimated to number from 15 to 25,000 in 1872); and the existence of mineral and natural resources in the area.”

The American economy wasn’t in good shape at that time. Experts think that the Delano letter and other previous reports and rumors regarding the wealth of the Black Hills were the real forces behind the expedition of the following year. General Alfred H. Terry of the Headquarters of the Department of Dakota in Saint Paul formally ordered the exploration of the Black Hills on June 8, 1874. Enter Custer…who was told to look for a site for Fort Abraham Lincoln, Dakota Territory, which ended up being located 7 miles south of Mandan, North Dakota, not in the Black Hills at all. Of course, the fort was likely to be used to protect the settlers and prospectors who were expected to flood the Black Hills. Custer’s expedition departed on July 2, 1874. Custer’s expedition, which was a mile long, included Custer, wearing a buckskin uniform, on his favorite bay thoroughbred at the head of ten Seventh Cavalry companies, followed by two companies of infantry, scouts, and guides. In all they were more than 1000 troops and one black woman, Sarah Campbell, the expedition’s 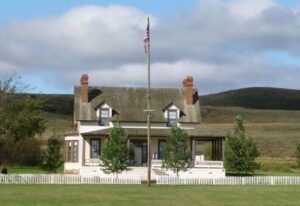 cook. The 110 canvas-topped wagons were pulled by six mule teams. In addition, they had horse-drawn Gatling guns and cannons, and three hundred head of cattle brought along to provide meat for the troops. The expedition even had a “Scientific corps” with them, which included a geologist and his assistant, a naturalist, a botanist, a medical officer, a topographical engineer, a zoologist, and a civilian engineer. Two miners, Horatio N. Ross and William T. McKay, were attached to the scientific corps. In addition, Custer brought a photographer, newspaper correspondents, the company’s band, hunting dogs, the son of US President Ulysses S. Grant, as well as his younger brothers, Tom and Boston. All to look for a site for a fort!!!