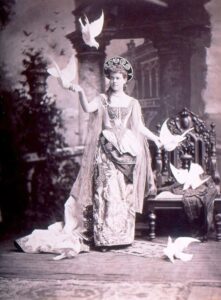 The Gilded Age, as we all know, was a time of great wealth. In fact, the rich people of that time literally had more money than they knew what to do with. Their solution was to spend it lavishly…building huge estates that stretched for miles, and home that were not only huge, but were lavishly decorated. The idea was to show the world that they had money and that they could do what they wanted. The thing is, you can only build so many houses, so what’s next. That said, they were always on the lookout for new and interesting ways to spend their money.

One of the “new and interesting things” they came up with were costume balls and theme parties. In fact, these were a special favorite. While this seems like an innocent and fairly inexpensive thing to do, the items these people purchased for their costume were definitely not inexpensive. They were a prime way to not only display wealth, but also to make a show of great spending on items that would be used for just one occasion and then tossed out or closeted away. Some of these items were quite expensive, and their owner couldn’t possibly be seen using it again, nor would these people buy something from someone else, because they didn’t want to use a hand-me-down item.

On March 26, 1883, one of the most famous balls of the age was held. It was an extremely elaborate costume ball to mark the housewarming of Cornelius and Alva Vanderbilt’s New York townhouse, which was built in the design of a French chateau. The thing is that while these people were all about wealth, they were a bit “snobby” about it, meaning that there was “old money” and there was “new money.” At this particular party, there was a bit of a problem, because the Vanderbilts were “new money” and not yet established in New York society. For Alva Vanderbilt, whose name we all know, this was humiliating. She thought her money should be as accepted as anyone else’s. To prove her family’s worth and that her money was as good as anyone else’s, she planned the party of all parties and even invited the media in to tour the new house and view the fancy party decor. Then to add insult to injury, she purposely did not send out an invitation to certain “old money” families. In the end, the Grande Dame of New York society, Mrs. Astor (who had a daughter who desperately wanted an invitation), was compelled to drop off her calling card at the Vanderbilt house. That card had great significance, because it signified that the Vanderbilts had at last “arrived” in society. Alva’s plan worked and she was delighted. So was Mrs. Astor’s daughter. Mrs. Astor, however, felt a little bit used. She was forced to accept 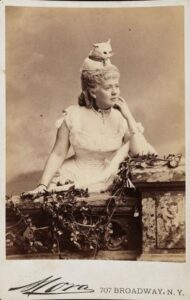 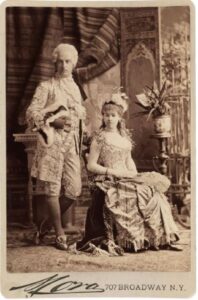 the Vanderbilts so her daughter would not be left out…whether she really accepted them in her heart, or not.

“New money” or “old money” aside, the party really was fantastic. Everyone went all out. Custom-made costumes, as well as costumes imported from Europe, featuring characters real and mythological from throughout European history. Alva had the Vanderbilt house decorated in silver and gold finery, with an abundance of colorful flowers on every floor. One floor was transformed into a tropical garden, and rooms throughout were lit by Japanese lanterns. Whether she planned it this way or not, in a smart move…for the sake of history…Alva hired professional photographers for the event. So, many of the photos taken that night have survived to prove that the ball really took place.