Wars leave unfortunate consequences, one of the biggest being orphaned children. World War II is no exception to that rule. After the surrender of Germany, the nation was basically split into four sections…the American Zone, the Soviet Zone, the British Zone, and the French Zone. It was all part of the denazification process. The term denazification refers to the removal of the physical symbols of the Nazi regime. In 1957 the West German government re-issued World War II Iron Cross medals, among other decorations, without the swastika in the center. That was just one of the ways that the Nazi regime was removed from Germany.

Another way was the Denazified School System and the denazification of the rest of the German government…which was then reassembled without the Nazi symbolism. With the school system effectively out of commission, the children of Berlin had very little or even no structure in their lives at all. These were children whose lives had been shredded by the war, many of whom had been orphaned by the conflict or had lost at least one parent. That lead to an overall lack of adult supervisors. Children, and especially teens and preteens, roamed the streets in packs. The situation was especially difficult for the children who had lost both parents. There weren’t any real orphanages either, and so these children formed their own “families” on the streets…like street gangs. These children were known as German “wolf children” also known as “Wolfskinder,” but the reality was that they were simply the forgotten orphans of World War II.

The schools eventually reopened, but they were often in half-ruined facilities, that were underfunded and understaffed, with some schools reporting student-to-faculty ratios of 89 to 1. That kind of a classroom ratio is far too big to be able to effectively teach the students. And the re-opened schools didn’t really address the issue of these orphaned “wolf children” who were often in hiding whenever authorities were around. These children were most likely afraid of authority, because it was the authorities who got their parents killed in the first place. Many of these children were forced to flee what was then East Prussia to Lithuania at the end of World War II. They felt like the German government had failed them. These children survived hunger, cold, and the loss of their identity, and the German government had long overlooked them, so why would they trust the government now.

No one really knows just how many “wolf children” there were. That number can only be estimated. Some say there were up to 25,000 of them roaming the woods and swamps of East Prussia and Lithuania after 1945. Russians were actually forbidden from taking in these “fascist children.” These children were actually told to go to Lithuania and given the promise that there would be food there. When they arrived, they couldn’t speak the language and they had no papers, so they had no identity…no one could even know their names. Those who were taken in often had every shred of memorabilia from their past stripped from them and tossed in the trash. That was the last part of who they really were. It was the price they would pay for food, safety, and security; and it was a failure of the German government, and the four nations who were in charge of reorganizing Germany. I suppose some would disagree with me on that note, but the reality is plain to see. If these children came across kind locals, the “Vokietukai” or little Germans, in Lithuanian, as they were known, were helped with buckets of soup in front of the doors, giving the children a little nourishment. If the residents were not so kind, they would set their dogs on the children.

While the “Vokietukai” had many struggles in Lithuania, life was still better than the fate that awaited the 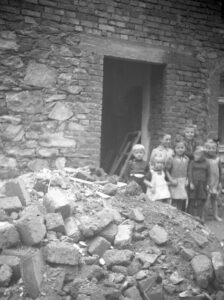 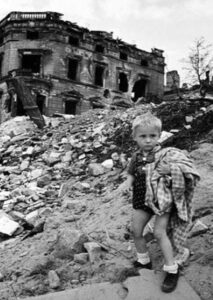 children who were too weak to make it to the Baltic states. There were thousands of these children, and they were sent to Soviet homes run by the military administration. That was the fate of approximately 4,700 German children in 1947, according to historian Ruth Leiserowitz, who has researched the fates of wolf children. Later that year, many of them were sent to the Soviet occupation zone. That zone later became the German Democratic Republic (GDR). Those poor children traveled in freight trains without any straw to sleep on…similar the Holocaust deportation years. These children were young…between 2 and 16 years of age. They arrived in East Germany after four days and four nights…really more dead than alive. There, they were put in orphanages or adopted by avid Communists. They never really escaped Communism…and that is the saddest part of all.