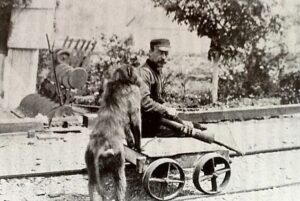 James Edwin Wide had lost both his legs in a work accident years earlier, and so in 1880, when he came across a Chacma Baboon driving an oxcart while visiting a busy South African market, he saw a way to make his life easier. Wide was impressed with the skills, and so he decided to buy him. Having two peg-legs and working had been very difficult on Wide over the years, and finally he saw an end to years of hardship. Impressed by the primate’s skills, Wide bought him, named him Jack, and made him his pet and personal assistant. His original plan was to have Jack drive him on his half-mile commute to the train station. So the first thing he trained the Jack to do was push him to and from work in a small trolley. Soon, Jack was also helping with household chores, sweeping floors and taking out the trash. Jack was very good at his work, and he truly loved Wide, almost as if Wide was his child.

While Jack was very good at his caregiving job, it was at the signal box Jack truly shined. The signal box was a system of manual switches operated in connection with the approaching trains whistles. As trains approached the 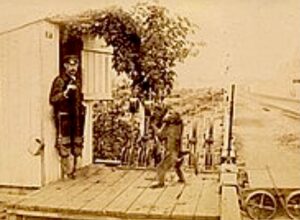 rail switches at the Uitenhage train station, they would toot their whistle a specific number of times to alert the signalman which tracks to change. By watching his owner, Jack picked up the pattern and started tugging on the levers himself. Jack was so smart. He was able to totally take over the signalman’s job that had been held by Wide. Soon, Wide was able to kick back and relax as his furry helper did all of the work switching the rails. According to The Railway Signal, Wide “trained the baboon to such perfection that he was able to sit in his cabin stuffing birds, etc, while the animal, which was chained up outside, pulled all the levers and points.”

One day, as the story goes, an upper-class train passenger, looked out the window of the train and saw that a baboon, and not a human, was manning the gears. Of course, this brought outrage, and a complaint to the railway authorities. The authorities decided not to act in haste and fire Wide, decided to resolve the complaint by testing the baboon’s abilities. The result of that test was a group of astounded officials. “Jack knows the signal whistle as well as I do, also every one of the levers,” wrote railway superintendent George B Howe, who visited the baboon sometime around 1890. “It was very touching to see 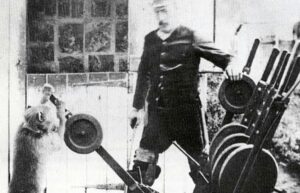 his fondness for his master. As I drew near they were both sitting on the trolley. The baboon’s arms round his master’s neck, the other stroking Wide’s face.”

The complaint was disregarded and Jack was reportedly given an official employment number, and was paid 20 cents a day and half a bottle of beer weekly. Jack passed away in 1890, after developing tuberculosis. It was a sad day for all who knew him. Jack had worked the rails for nine years, without ever making a mistake. That shows that animals can be trained to do things in a responsible way, and do their job perfectly.