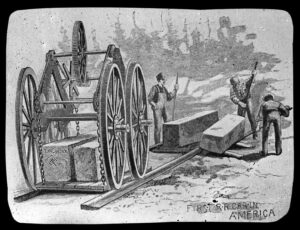 As with any new form of transportation, the first accident is inevitable. There may have been train wrecks in other countries, but the first recorded railroad accident in United States history happened on July 25, 1832, when four people were thrown off a vacant car on the Granite Railway near Quincy, Massachusetts. The people were there by invitation, to watch the process of transporting large and weighty loads of stone. The victims were observing From a vacant car as the large were being loaded. Suddenly, a cable on the vacant car snapped, throwing them off the train and over a 34-foot cliff, one man was killed and the others were seriously injured. It was a fluke, and no one could possibly have known of expected such a break. I suppose that cables had not been used for the purposes they now were…loading large rocks and their duties on trains. Cables can fray and snap. That is just a fact of life. Death is a fact of life, and on that day, when the cable broke, the wagon containing Thomas B Achuas of Cuba was killed when the wagon derailed as he and three other tourists were taking a tour.

While it was a setback, trains were, in fact, a matter of necessity, and the acceptance of railroads came quickly in the 1830s and beyond. By 1840 the United States had almost 3,000 miles of railway, which was more than the combined European total of only 1,800 miles. The railroad network expanded quickly in the years before the Civil War, and by 1860 the American railroad system had become a national network of some 30,000 miles. 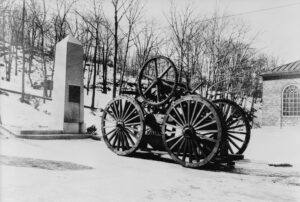 Nine years later, transcontinental railroad service became possible for the first time. These were great successes, but they did not come without a price, and sometimes that price is very heavy.

When architect Solomon Willard arrived in Quincy, Massachusetts, in 1825, and discovered a granite ledge in a wooded area, he knew he had found the perfect raw material for what would become his most famous building, the Bunker Hill Monument. Willard envisioned a 221-foot tall monument with a 30 feet square base that would require some 6,700 tons of granite. Transporting the massive blocks of granite from the quarry to the site of construction presented a challenge. That’s where the train came in. Quincy was separated from Charlestown, where the monument would be erected, by 12 miles of swamp, forest, and farms. The granite needed to be delivered to Neponset River, four miles north, from where a barge would transport the stone through Boston Harbor to Charlestown. Willard wanted to move the stones to the Neponset River on sledges during winter, but engineer Gridley Bryant, suggested a more efficient method…a railroad.

With the support Boston businessman and state legislator Thomas Handasyd Perkins, Bryant ended up designing what would become the first, commercial railroad in the United states. Rather than steam locomotives, Bryant used horses to pull the railcars a distance of three miles from quarries to the Neponset

River. A single horse could pull three cars loaded with 16 tons of rock over wooden rails plated with iron. Later, the wooden rails were replaced with granite rails. The iron plates were retained.

Although, Bryant benefitted from developments already in use on railroads in England, he did modify his design to allow for heavier, more concentrated loads and a three-foot frost line. The Granite Railway also introduced several important inventions, including railway switches or frogs, the turntable, and double-truck railroad cars. Gridley Bryant never patented his inventions, believing they should be for the benefit of all.

One Response to The First Train Wreck