Not A Political Man 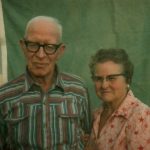 My husband’s grandfather, Robert Knox came from a long line of political figures, but he was not a political man. The ancestors who were political were pretty far in the past. There were also some military connections, which he probably never knew about, other than his own family members who served, like his brother Frank Knox. Grandpa’s life fell between wars, so he was not called to serve in the military.

Truth be told, Grandpa was more of a farmer/rancher type. It was where he felt most at home. I will never forget the early years of my marriage to Bob, when Grandpa would spend hours in the family garden growing tons of vegetables, which the women in the family would can to supply vegetables for the coming year. It made Grandpa feel useful in his retirement years. 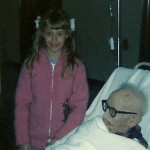 continued the Grandma first teasing that had gone on their entire marriage, because Grandma was six months older than Grandpa was, and she enjoyed teasing him. And I’m sure he enjoyed it too over the years, but this idea of having a granddaughter born on his birthday…that was cool.

Grandpa left us in 1985, and we still miss him and Grandma. Today would have been his 112th birthday. Happy birthday in Heaven, Grandpa. I know you and all the family who have gone one before are having a great time. We love and miss you very much.