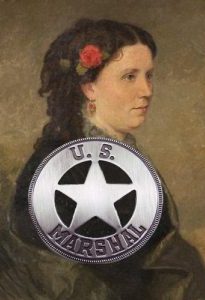 In the days of the Old West, women were considered the “weaker sex” and they were supposed to be cared for and protected by their male counterparts. Most women were fine with that idea, but there were a few, like Annie Oakley and Susan Anderson, who broke the mold. Annie Oakley was an amazing markswoman and Susan Anderson was a doctor. These women weren’t alone in their desire to leave their mark on the world.

The world of law enforcement, especially in those days was clearly a man’s world, but in 1891, a woman named F M Miller was commissioned out of the federal court at Paris, Texas as the only female deputy that worked the Indian Territory. Miller was known as a fearless and efficient officer, who had locked up more than a few offenders. She was a “young woman of prepossessing appearance, wears a cowboy hat and is always adorned with a pistol belt full of cartridges and a dangerous looking Colt pistol which she knows how to use.” Apparently, hiring a female deputy wasn’t all that unusual, but the women deputies were known as office deputies, basically a secretary.

Oklahoma has set the pace for something more. United States Marshal C H Thompson, of Guthrie appointed two women as deputies for field work. It was almost unheard of. If a woman choose the vocation of professional thief taker in the most civilized portion of the land would be strange enough, but how strange is it when she chooses field duty on the worst territory in the Union. Criminals in Oklahoma and in Indian Territory, the district where these two girls, S M Burche and Mamie Fossett spent their days, were among the most dangerous anywhere. They were accused of murder, rape, robbery, arson, adultery, bribery, and numerous other crimes. These outlaws initially hid out in Indian Territory, because it was without law enforcement, with the exception of the Indian Nations’ police forces, who had no jurisdiction over the many criminals who had taken flight from other states. The outlaws were ruthless and willing to kill to avoid jailtime. More lives were lost among Federal officers in a year than in all the rest of the nation together. So it would seem that these girls possessed exceptional guts and spunk to willingly undertake such duties.

Burche and Fossett were truly spunky and adventurous women. They had no qualms about invading the newly opened Oklahoma territory. They were young, fairly good-looking, well-educated, fearless, and independent…and they were definitely not Marshal Thompson’s secretaries. When they took the oath of office and assumed their duties it was with distinct understanding that they would serve the Government just as would any other deputy marshal. They were to take the field, serve writs and warrants, and make arrests just as any male deputy might be called on to do. And they did it with great success. 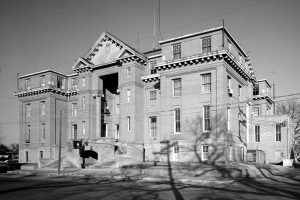 The wildness of the Oklahoma and Indian Territory would soon come to an end when Judge Isaac Parker was appointed to the Western Judicial District of Arkansas, which included Indian Territory. Parker would go on to command about 200 deputy marshals to “clean up” the lawless territory, but that would take years as the deputies struggled to cover the more than 74,000 square miles in their search for hundreds of wanted fugitives. It was not going to be a speedy process. Into this dangerous midst, a number of men made names for themselves. Men such as Heck Thomas, Bass Reeves, Bill Tilghman, Chris Madsen, and dozens of others. More quietly, a few other deputies also made names for themselves. Quietly, because they were women.