Shot Down Over Serbia 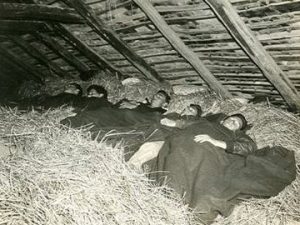 On January 24, 1944, the first of over 500 American airmen bailed out of their disabled planes over the German-occupied zone of Serbia. That first day, the Germans shot down two Liberators…one over Zlatibor and the other over Toplica. One bomber made an emergency landing between Plocnik and Beloljin. That crew of nine men were rescued by the Chetnik Toplica Corps under the command of Major Milan Stojanovic. The crew were placed in the home of local Chetnik leaders in the village of Velika Dragusa. The other bomber crew bailed out over Mount Zlatibor. They were found by members of the Zlatibor Corps. A radiogram message on the rescue of one of the crews was sent by Stojanovic to Mihailovic on January 25th. Major Stojanovic wrote that the previous day about 100 bombers flew from the direction of Nis towards Kosovska Mitrovica, and that they were followed by nine German fighter aircraft. After a half-hour battle, one plane caught fire and was forced to land between the villages of Plocnik and Beloljin, in the Toplica River valley.

Over the next few months, more planes were shot down, and more crews were rescued by the Serbian resistance. In all it was thought that 432 men had been hidden, effectively saving them from the German prison camps. In the end, it was determined that the actual number of men in need of rescue was 512. The men had no way of knowing that they would be “guests” of the Serbian resistance for 7 long months, and in some cases longer.

The two resistance groups, Marshal Tito’s Partisans and Draza Mihailovic’s Chetniks, both hated the Nazis vehemently, and they also hated each other. It made working together difficult at best. Still, they shared a common goal…to defeat the Nazis, and they were willing to do what was necessary to achieve that goal. While it was sometimes possible to smuggle the airmen out and reunite them with their units, it was not always possible. When they could not get the men out, they kept them in their homes, and shared what little food they had with them.

In July 1944, these men again came to the attention of the Office of Strategic Services (OSS), and they began to draw up plans to bring the men home. I’m sure by then, the men thought they really had been forgotten, or maybe that no one knew about them at all, but now they were going to be going home. Operation Halyard, the operation to bring home these men, commenced on August 9, 1944 and continued until December 28, 1944. The men would be airlifted out of Serbia 12 men at a time, but before any airlift could take place, they had to build an airstrip. The C-47 cargo plane required 700 feet of runway for takeoffs and landings. The men and the 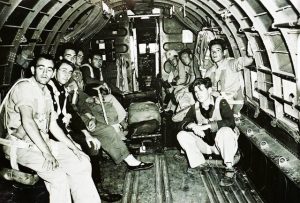 people of Serbia built an airstrip that was exactly 700 feet long. It was bordered by forest and mountains, so the takeoffs and landings would have to be precise. According to historian Professor Jozo Tomasevich, a report submitted to the OSS showed that 417 Allied airmen who had been downed over occupied Yugoslavia were rescued by Mihailovic’s Chetniks, and airlifted out by the Fifteenth Air Force. According to Lieutenant Commander Richard M Kelly (OSS), a grand total of 432 United States and 80 Allied personnel were airlifted during the Halyard Mission. In the end, at least in this mission, the military lived up to its motto, “Never leave a man behind.”