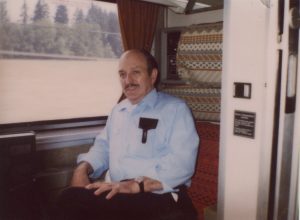 My dad, Al Spencer loved trains. I’m sure it all started with his dad’s job as a carpenter on the Great Northern Railway. Dad and his siblings rode the trains to school and such. It was one of the perks of his dad’s job. I know most kids like trains, but I think Dad maybe liked them more than most kids. He grew up around them.

On May 1, 1971, a very exciting event took place, especially for my dad. It was on that day that the Amtrak train was born. It was originally established by the Congressional Rail Passenger Service Act, which consolidated the United State’s existing 20 passenger railroads into one. Of course, most of us know that the Amtrak train has since had a long history…49 years to be exact. Back then the Amtrak train line served 43 states with a total of 21 routes. These days they not only handle traditional interstate passenger rail in 46 states, but they also operate high-speed trains along their busiest route, the Northeast Corridor from Washington DC, to Boston. With more than 500 destinations throughout a 21,000 mile system, Amtrak has grown to 33 routes across America. Nevertheless, the Amtrak train system was always focused on getting from Point A to Point B safely and swiftly, even in 1971.

From the time that first Amtrak rolled out of the station, my Dad was hooked. He knew he wanted to take a trip by way of that train. During the early years of the Amtrak, we heard a lot about it. It wasn’t going to be a trip that we went on as a family, but rather a special trip for Dad and Mom. That trip would finally happen in about 1991, when Mom and Dad took the Amtrak from San Diego to Seattle. My sister, Caryl Reed and her family lived there at the time, and they would spend time visiting with them after the train ride. My dad was so excited!! In fact, he was the epitome of “the kid in the candy shop.” I can see why he would be so excited. After 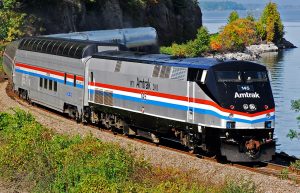 all, he had waited twenty years for that trip. I suppose that prior to that time, he couldn’t think of any reason to take the trip, but when my sister moved to Bremerton, Washington, the time had come. Mom and Dad made many trips to Washington in those years, but that trip on the Amtrak Train really was the most exciting way for them to travel.

I can picture my dad now. Not how he looked. I have a picture of that. No…I can picture how he felt. He was that “kid in the candy store” again. I could picture him feeling like he was back in Superior, Wisconsin, hopping the train, even though he had a pass to ride the train.

2 Responses to That Train