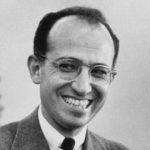 In a time of global pandemic, many people are thinking about the Coronavirus, and the impact it is having on all our lives. Of course, there have been a number of pandemics in years past, such as the Spanish Flu Pandemic of 1918, that killed 50,000,000 worldwide. The pandemic was active from January 1918 to December 1920. So little was known then about how to protect ourselves from these things, or even what a virus was. We learned from that pandemic and others as the years went on.

One such epidemic was the Polio Epidemic in the United States, the 1952 epidemic was the worst outbreak in the nation’s history. It is credited with heightening parents’ fears of the disease and focusing public awareness on the need for a vaccine. Of the 57,628 cases reported that year 3,145 died and 21,269 were left with mild to disabling paralysis. Finally, on March 26, 1953, American medical researcher Dr Jonas Salk announced on a national radio show that he has successfully tested a vaccine against poliomyelitis, which is the virus that causes the crippling disease of polio. Dr Salk was celebrated as the great doctor-benefactor of his time, for promising eventually to eradicate the disease, which is known as “infant paralysis” because it mainly affects children.

Polio attacks the nervous system and can cause varying degrees of paralysis. The disease affected humanity throughout recorded history, and since the virus is easily transmitted, epidemics were commonplace in the first decades of the 20th century. The summer of 1894 brought the United States first major polio epidemic, beginning in Vermont. By the 20th century thousands were affected every year. In the first decades of the 20th century, treatments were limited to quarantines and the infamous “iron lung,” a metal coffin-like contraption that aided respiration. Although children, and especially infants, were among the worst affected, adults were 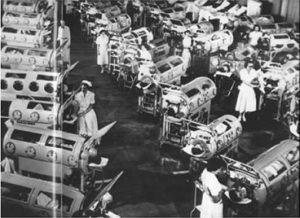 also commonly afflicted, including future president Franklin D Roosevelt, who in 1921 was stricken with polio at the age of 39 and was left partially paralyzed. Roosevelt later transformed his estate in Warm Springs, Georgia, into a recovery retreat for polio victims and was instrumental in raising funds for polio-related research and the treatment of polio patients.

Salk’s procedure, first attempted unsuccessfully by American Maurice Brodie in the 1930s, was to kill several strains of the virus and then inject the benign viruses into a healthy person’s bloodstream. The person’s immune system would then create antibodies designed to resist future exposure to poliomyelitis. Salk conducted the first human trials on former polio patients, on himself, and his family. By 1953, he was ready to announce his findings. The announcement was made on March 25th, on the CBS national radio network, and two days later in an article published in the Journal of the American Medical Association. Dr Salk became an immediate celebrity.

Clinical trials using the Salk vaccine and a placebo began in 1954 on nearly two million American schoolchildren. It was announced that the vaccine was effective and safe in April 1955, and a nationwide inoculation campaign began. Unfortunately a defective vaccine manufactured at Cutter Laboratories of Berkeley, California, had tragic results in the Western and mid-Western United States, when more than 200,000 people were injected with a defective vaccine, and thousands of polio cases were reported, 200 children were left paralyzed and 10 died.

The ensuing panic delayed production of the vaccine. Still, new polio cases dropped to under 6,000 in 1957, the

first year after the vaccine was widely available. So, other than the defective vaccine, maybe it was working. Scientists continued to improve the product, and in 1962, an oral vaccine developed by Polish-American researcher Albert Sabin became available, greatly facilitating distribution of the polio vaccine. These days, polio has been all but wiped out, and there are just a handful of polio cases in the United States every year. Most of these are “imported” by Americans from developing nations where polio is still a problem. Jonas Salk was awarded the Presidential Medal of Freedom in 1977, among other honors. He died in La Jolla, California, in 1995.