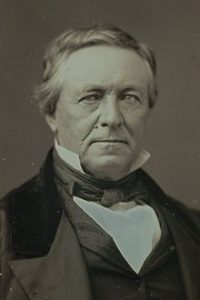 I think that many of us have thought about a hidden treasure…probably as kids, but maybe as adults too. In fact, with the number of metal detectors sold every year, maybe there are just as many adults looking for hidden treasure as kids.

Dr John Marsh was born June 5, 1799 in South Danvers, Massachusetts. In college at Harvard, he had intended to study ministry, but changed his mind and received his bachelors degree in medicine. He then studied medicine with a Boston doctor. He then decided to move to California, and became an early pioneer and settle in Alta, California. He was also the first Harvard graduate, the first to practice medicine there. He knew Hebrew, Latin and Greek, and was the first to compile a dictionary of the Sioux language. He became one of the wealthiest ranchers in California, and was one of the most influential men in the establishment of California statehood.

The Reverend William W Smith introduced Marsh to Abigail “Abby” Smith Tuck, a schoolteacher from New England, who also served as principal at a girls school in San Jose. After a brief two-week courtship, they were married on June 24, 1851. Soon after the wedding, the couple moved into the old adobe. On 12 March 1852, she gave birth to a daughter they 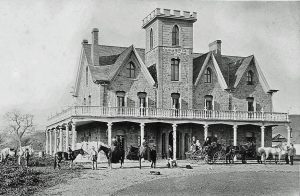 named Alice Frances. Shortly thereafter, Marsh set out to build his family a home. Abby had picked the spot for their home. The home that was nestled in the foothills of Mount Diablo. The home was located next to a creek that was later named Marsh Creek after the doctor. While the home was stunning, the cost of building it did not exceed $20,000.

Marsh was not only a doctor, but also a rancher, and was very successful, even though he was usually paid for medical services in the currency of the day…cowhides and tallow. Marsh might have been a bit of an eccentric, or maybe he just didn’t trust banks. Whatever the case may be, he was known to bury his money in the foothills near his home. Abby died in 1855, and maybe that was what set Marsh to burying the money. I don’t think anyone knows. It is thought that Marsh buried about $40,000 in gold coins in the area, but the money 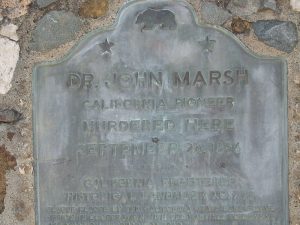 has never been found. On September 24, 1856, while coming home from Martinez, Marsh was murdered. It happened on the road between Pacheco and Martinez. Riding by, he was ambushed and murdered by three of his vaquero employees over a dispute about their wages. Two of the killers were found ten years later and brought to trial. One man turned state’s evidence and was released without trial. The other was convicted and sentenced to life in prison, though he was pardoned 25 years later. The third man was never caught. A California Historical Landmark #722 plaque still marks the site of the murder. John and Abigail Marsh are buried in Mountain View Cemetery, in Oakland, California.