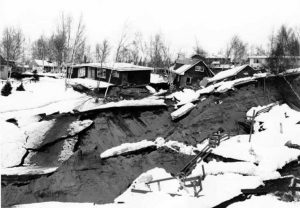 The earthquake struck at 5:35pm local time on Good Friday, March 27, 1964. Its epicenter was 12.4 miles north of Prince William Sound, 78 miles east of Anchorage and 40 miles west of Valdez. Across southcentral Alaska, ground fissures, collapsing structures, and tsunamis resulting from the earthquake caused about 131 deaths. Soil liquefaction, fissures, landslides, and other ground failures caused major structural damage in several communities and much damage to property. Anchorage was hit very hard, and sustained great destruction or damage to many inadequately earthquake-engineered houses, buildings, paved streets, sidewalks, water and sewer mains, electrical systems, and other man-made equipment, particularly in the several landslide zones along Knik Arm. Two hundred miles southwest, some areas near Kodiak were permanently raised by 30 feet. Southeast of Anchorage, areas around the head of Turnagain Arm near Girdwood and Portage dropped as much as 8 feet, requiring reconstruction and fill to raise the Seward Highway above the new high tide mark.

I came to know of this horrific 9.2 magnitude earthquake when my husband, Bob and I were on a cruise to Alaska. The cruise ended in Anchorage, and we had taken an extra day for exploration of the area. My first notice of this Alaskan earthquake was on a shuttle ride from the airport to Anchorage proper. We had the day before our flight at 10:30pm, so we stored our luggage at the airport and took the shuttle back into town. The shuttle driver took us by the Turnagain Heights neighborhood, the current location of Earthquake Park. She told us that the soil there had liquified and homes were swallowed…some almost completely, leaving only their chimneys above ground, while others were swept out to sea in the ensuing tsunami waves. I couldn’t shake the dreadful feeling of the horror that had happened there. A stop in a museum, including a documentary about the 1964 Alaskan earthquake, told me that the earthquake that happened in the modern-day Earthquake Park, was the 1964 Alaskan earthquake. Of course, I was only 8 years old when it happened, so I guess that it is not so odd that I hadn’t heard of it.

We began a much longer than expected walk along the Tony Knowles Coastal Bicycle Trail. Of course, people were walking on the trail too, but we had no idea how long the walk back to the airport would be. Nevertheless, the walk took us through Earthquake Park, and…well, I have only noticed such an air of heaviness in one other place…Gettysburg Battlefield. There is something about being in a place where so much death and destruction occurred. I takes on an air of being “hallowed ground” somehow. President Lincoln knew what he was talking about when he gave the Gettysburg Address. Walking through Earthquake Park, you could see the rippled ground, where the liquified soil had rolled back and forth during the earthquake. We didn’t get off the trail, so if there were chimneys visible near us, we didn’t see them, but I was moved to think that beneath our feet, there might be houses that people had lived in. I didn’t know if the people who had lived there were there still, or if 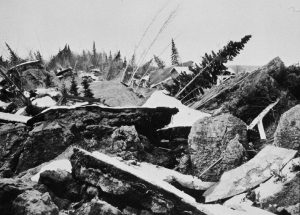 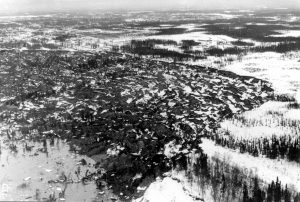 they had been located and buried after the disaster. Whatever the case may be, I left the area feeling very different than I had just two days earlier. I had been in the exact place where such a devastating disaster had happened, and I have never forgotten that place, just as I have never forgotten the feeling I felt at Gettysburg. Some things just have a profound effect on us…forever.

One Response to Turnagain Heights Tragedy