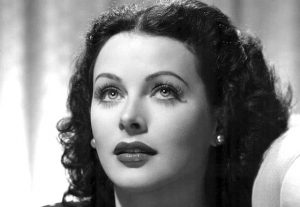 Not many people these days have heard of Hedy Lamarr, but I have heard of her, because she was an actress in my parents’ era. It goes without saying that Hedy Lamarr was beautiful…by any standard. Hedy Lamarr was a star in the 1930s and 1940s, starring in some well known movies including Boom Town with Clark Gable and Samson and Delilah with Victor Mature. While she’s certainly famous because of her acting career, she didn’t make any big world changes because she starred in some old movies. Instead, Hedy Lamarr had a pastime that did change the world. You wouldn’t know it…or certainly you wouldn’t expect it…but in her spare time Hedy Lamarr liked to work on her inventions. Seriously, who would have thought that?

World War II began in 1939, but after the Japanese attacked Pearl Harbor on December 7, 1941, the United States entered the war. By 1942, Lamarr was at the height of her acting career. Still, like many patriotic Americans, she wanted to help in the war effort. She could have gone in as a nurse, or something, but she had something else in mind. Hedy Lamarr wanted to help the Allies come up with a communications system that couldn’t be intercepted by enemies. Now, I can only imagine how that would have gone over in an era where woman were thought not to understand the ways of war. So she and her friend, composer George Antheil, patented an idea for something they called the “Secret Communications System.” It was a system that would change radio frequencies in a per-programmed method. I hadn’t heard of such a method, although I suppose others have. If someone was listening…and the enemy was always trying to listen, they would only hear snippets before it changed to a different frequency. It sounds logical, but ultimately, the military didn’t end up using the system.

Flash forward a few decades, and you will find that Lamarr and Antheil’s patent became really important because it was a cheap and effective way to create security in new emerging technologies like military communication, cellular phones, and WiFi. What the military couldn’t use effectively in World War II, became important part of modern-day communication, and something most of us couldn’t do without…especially in the an

middle of a global pandemic. To look at her, Hedy Lamarr would have instantly been classified as a pretty girl, but most likely with out a head for mathematics or science…especially not in the field of electronics, but that classification would have proved very wrong. Hedy Lamarr had it all…looks and brains. Her contributions to modern-day technology prove that. As for Lamarr, her film career cooled down in the 1950s and her last movie was released in 1958. She became reclusive in her later life and passed away on January 19, 2000. She was 86.