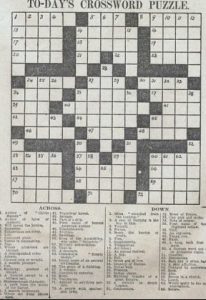 As the Allies were planning the massive D-Day assault which was intended to end World War II in Europe, some strange “coincidences” happened that almost threw a monkey wrench into the whole thing. The planned assault on Normandy, France, in 1944, was to include over 5,000 ships, 1,200 planes, and almost 160,000 men. They were set to invade Europe from the British Isles, when something almost put a stop to it…a series of crossword puzzles. Personally, I hate crossword puzzles. They are boring in my mind, so if I were to find a clue in one, it would likely be a miracle.

The problem began with the Dieppe Raid on August 19th, 1942. Dieppe is also in Normandy, but further North. In Dieppe, over 6,000 Allied troops, mostly from Canada, attacked at 5 AM. “They had four main goals: (1) to prove that it was possible to capture a slice of Nazi-occupied Europe, (2) to boost Allied morale, (3) to gain intelligence, and (4) to destroy coastal defenses and other sensitive installations.” The mission failed miserably, with the loss of, capture of, or retreat of almost 60% of the invading forces by 3 PM. This couldn’t have been just coincidental, and the Allies wanted to know what had happened. It seemed quite likely that the Germans had been warned of the attack. How could this have happened. Somehow, the suspicion fell on The Daily Telegraph, a British paper still in business today. I’m sure there were a number of newspapers over the years that were used to pass coded messages to the enemy. And I guess it would take a spy’s mind to figure it all out. It had to be discreet, because the paper can’t just give advance warning notice to the enemy, but they did (and still do) have a crossword puzzle section. What better avenue for coded messages. The thing that really triggered suspicion was that two days before the Dieppe invasion, the clue, “French port” was given. And the solution was “Dieppe,” given the following day…the day before the invasion. When I think about the 6,000 men that walked into an ambush because of that one puzzle, I feel furious. This wasn’t a coincidence, this was deliberate, and it was criminal.

The intelligence personnel quickly focused on Leonard Sydney Dawe…the headmaster of Strand School, who was responsible for the crossword puzzle. They were surprised to think it might be him, because he was a veteran of World War I. In addition, nothing linked him to Nazi Germany. In the end, MI5 concluded that it was just that a chilling coincidence, but was it…really? The Strand School for boys in south London, which no longer exists, still stuck out as being somehow involved. It was learned that when the Germans began their bombardment of the city in 1939, Strand was moved to Effingham in Surrey, which was close to where many American and Canadian forces were based.

The French invasion was called Operation Overlord. It was to take place on June 5th, 1944 and involve a series of joint sea and air landings along the Normandy coast. Rather than mass themselves at one spot, however, they were to land at five different areas according to nationality. The Americans were to land at two places. The first was on the left bank of the Douve estuary…codenamed Utah Beach. The second was the stretch which included Sainte-Honorine-des-Pertes, Saint-Laurent-sur-Mer, and Vierville-sur-Mer…referred to as Omaha. The 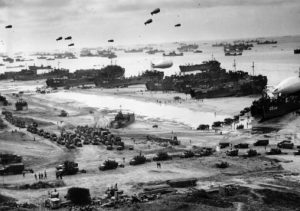 British were also given two landing sites – the first along Saint-Aubin-sur-Mer to Ouistreham…Sword Beach, as well as the strip from Arromanches-Les-Bains, Le Hamel, and La Rivière…Gold Beach. As for the Canadians, they were assigned the stretch from Courseulles, Saint-Aubin, and Bernières…Juno Beach. To ensure the quick off-loading of cargo, portable bridges called “Mulberry Harbors” were built. Ships would tow these to France, assemble them at sea, then drive equipment onto the beaches.

The massive size of the invasion, made it almost impossible to keep a complete secret from the Germans, so the plan was to keep them guessing as to exactly when and where the invasion would take place. It was then that the Allies launched Operation Bodyguard…a series of diversions which convinced the Germans that Normandy was simply a distraction, while the main invasion was to take place elsewhere. The Germans bought it, they didn’t want to take any chances. As a result, they stretched their forces thin in a desperate attempt to cover all of their bases. To keep them off balance, absolute secrecy was vital.

Then, in February 1944, one of The Daily Telegraph’s crossword answers was “JUNO.” The following month, it was “GOLD,” and the month after that, it was “SWORD.” Coincidence? MI5 thought so. Then, when the next puzzle included the clue, “One of the US,” they began to wonder. The next day, the answer given was “UTAH.” This was really too much, and MI5 was getting worried. As soon as the May 22nd edition came out, MI5 anxiously grabbed a copy. Scanning the crossword section, they found yet another suspicious clue…“Red Indian on the Missouri River.” And what was the answer given the next day? “OMAHA.” Lets just say, they were getting nervous. Still, it got worse. The May 27th edition had another damning clue…“Big-Wig.” And the answer was? “OVERLORD.” The clincher came on June 1…four days before lift-off. The solution to 15 Down was “NEPTUNE.”

Dawe was arrested at his school to the astonishment of the students and staff. They then banned the paper’s next publication in case “DDAY” appeared in the next crossword. The US Coast Guard manned USS LST-21 unloads British Army tanks and trucks onto a “Rhino” barge during the early hours of the invasion on Gold Beach, 6 June 1944. Dawe was released after the invasion but refused to speak about his ordeal till 1958. He admitted that they did turn him “inside-out,” and had D-Day turned into another Dieppe, he might have been shot. Many people thought it was all just a coincidence…at least till 1984 when Ronald French, a former student at Strand, came forward. As it turns out, Dawe didn’t create crossword puzzles. He instead had students arrange words on a grid, and when he was satisfied, provided clues to solve them by. Then he’d send the finished work to the paper, taking credit for the work. According to French and other former students who later came forward, everyone in Surrey knew the code words. It seems that because they all hung around the Americans and Canadians, the words had leaked out. The French didn’t know what the words meant, only that the servicemen often said them. So when told to work on the crossword puzzles, he included the codes. After his release, Dawes confronted French and accused him of putting the entire country at risk, but how had this 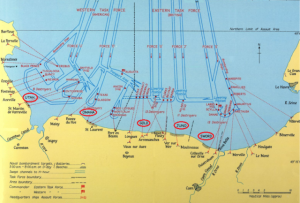 happened. It seems that despite their own secrecy, the MI5 had apparently forgotten to tell the army to keep their mouths shut. It all came about because when the Allies believed that the war was turning in their favor, the Third Washington Conference…also called the Trident Conference…was held in Washington, DC in May 1943. It was there that plans for an Allied invasion of Sicily, France, and the Pacific were discussed. The careless soldiers that spilled the code words almost cost the Allies the victory. D-Day was a battle that cost the Allies many lives, but it could have been much worse, if the secrets had been passed to the enemy in a way that they could have understood them.