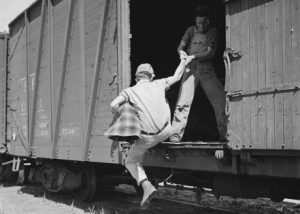 When my dad, Allen Spencer and his brother, Bill Spencer were young boys going to school, their dad, Allen Luther Spencer worked for the Great Northern Railway. Because they lived a good distance from school, the boys and their sister, Ruth Wolfe had a dependent pass to ride the train to school. That pass didn’t stop the boys from “hopping” the train…in true Hobo fashion. Of course, we know that “hopping” a train is illegal now, but back then it wasn’t. My dad, Uncle Bill, and Aunt Ruth had passes however, so 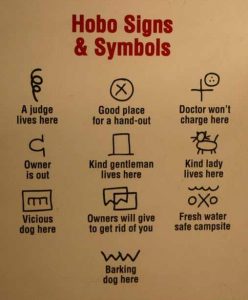 During the Depression years, there were a lot of Hobos. The railroad was a quick way to get to jobs far away…and it wasn’t technically illegal…just frowned upon. President Roosevelt even created the 1933 Federal Transient Service, which built 600 shelters alongside the trains, to provide food, board, and medical care for working migrants…aka hobos, or at least part of them. As organized crime began using the railway for it’s own purposes, these services were shut down, and “hopping” a train became illegal. Nevertheless, illegal or not, there are actually tons of resources 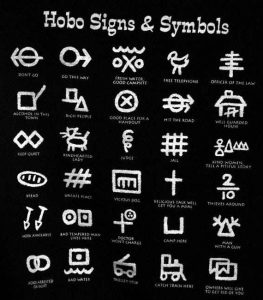 online to help hobos, and most hobos carry smart phones, and even laptops, so they can take advantage of the online forums and Facebook pages available to them. I looked at these online sites, and I found that they call themselves misfit travelers.

Over the years, hobos have developed their own code and language. I found that to be very interesting. Life on the streets, and especially train hopping can be a very dangerous kind of lifestyle. Sometimes, people living on the streets and traveling by hopping trains, need help…even if they find themselves in a position whereby they have to bend the law a little. Th codes and the language they developed help them maneuver this world in a little bit more safe way. I’m not condoning breaking the law, but these people are already there. They just took a wrong turn, and now they need help to make it, and hopefully make it back.