It Would Be Dishonorable 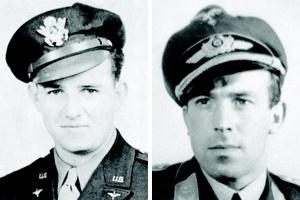 In a war, the point is to kill the enemy, or be killed by the enemy. There is no room for soft hearts and compassion…or is there? On December 20, 1943, Charlie Brown, an American B-17 bomber pilot and his crew attempted to bomb an aircraft production facility in Bremen, Germany, as part of a bombing run with a squadron of B-17s. Unfortunately, the interior areas of Germany were better fortified with anti-aircraft guns. As the bombing run reached the factory, and dropped the payload, the 250 anti-aircraft guns which surrounded the factory were fired. Charlie Brown’s B-17, Ye Olde Pub, was hit, disabling two engines and forcing the plane out of formation. It was the habit of the German fighter planes to go after any stragglers, knowing that they were the weaker link. Brown’s damaged B-17 was chased down and several of the crew members were seriously wounded. The hit also knocked out all but one of the plane’s engines.

Thinking the plane was doomed, the fighters turned their attention to other prey. Meanwhile, Ye Olde Pub tried to limp along toward England, hoping not to be spotted. Of course, they knew their hope of escape was quite unlikely, and before long they were spotted by German fighter pilot Franz Stigler, who was refueling. Stigler jumped into his plane and took off, catching up with the wounded plane quickly. Stigler was about to blast the plane, when he saw that the crew was seriously wounded. Stigler, a combat veteran with 22 confirmed kills, was reluctant to attack a defenseless aircraft, so instead pulled alongside the B-17 cockpit and signaled the crew to land. They refused. He then motioned in the direction of Sweden, which would get them on the ground, but also take them out of the war. It didn’t really matter, because the Allied crew didn’t understand.

Unable to convince them to land, but also unwilling to leave them, Stigler flew side-by-side with the stricken bomber, even though he was afraid his own plane might identify him, and his actions might get him executed. As Brown’s B-17 approached the safety of the English Channel, Stigler saluted and peeled off…not really expecting the B-17 to make it safely home. Miraculously, Brown kept the plane in the air and made it to England. Brown 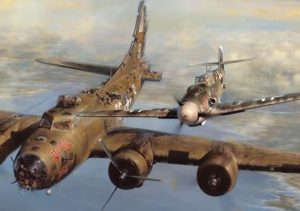 often wondered why Stigler hadn’t shot him down, but never expected to know who the unknow German fighter pilot was. Nevertheless, after the war, Brown placed an ad in a World War II newsletter for pilot veterans. Amazingly, Stigler, who had relocated to Canada, saw the ad. The two pilots reunited, both still in shock to see the other, and when Brown ask the question that had been burning in his mind for years…why didn’t Stigler shoot them down? Stigler explained that to shoot at them would have been dishonorable. Charlie Brown was shocked to know that even among the enemy, there could exist such compassion. The two pilots immediately felt like they were forever connected. They remained close friends until their deaths in 2008.