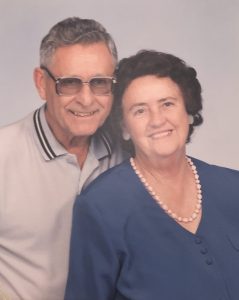 My uncle, George Hushman entered life in a troubled situation, and in the end, it was destined to get worse. His mother passed away when he was very young, and his dad was not involved or interested in his children’s lives or welfare. Uncle George and his sister, Betty were placed in an orphanage. They would not be one of the few older children to get adopted, because as most of us know, adoptive parents prefer babies. That might seem like the end of a sad story, but it isn’t. While George was not adopted “officially,” he did have families who “adopted” him in many ways. Wallace and Hettie Saint John, who were my future son-in-law, Kevin Petersen’s great grandparents, were very good to Uncle George, who was friends with their sons. The treated him like one of the family.

Then, of course, there was the Byer family, into which Uncle George would marry, 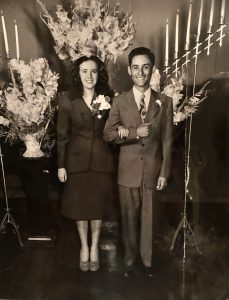 making him my Uncle George when he married my aunt, Evelyn Byer. This was the point when Uncle Georges life took its most amazing turn. Upon their meeting, my aunt and uncle only had eyes for each other. Their world was suddenly filled with all of God’s greatest blessings. Their marriage would produce five beautiful children, Sheila “Susie” Young, George Byer, Shelley Campbell, Shannon Limmer, and Greg Hushman. They also went on to have many grandchildren, great grandchildren, and great great grandchildren. Theirs was a match made in Heaven. They were happy, and they were together as much as it was possible. Their marriage would endure the hardships and sadness that every marriage does, and it thrived. Anyone who knew them could see their great happiness. At the time of Aunt Evelyn’s passing on May 4, 2015, they had been married for 68 years. That is almost unheard of!! When Uncle George joined her in Heaven, they had been married 71 years, and they were 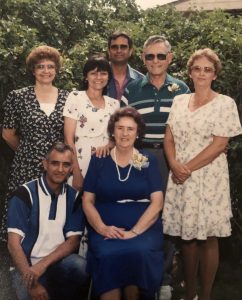 reunited on Uncle George’s 92nd birthday. What a wonderful birthday present. Their eyes got to see each other once more, their hearts were reunited. I’m sure Uncle George was ecstatic!!

Uncle George was a quiet sort of man, but always kind. I always loved going over to their home, because we were always treated kindly by them both. They had built their house in Mills, Wyoming, in 1948, with the help of family. They loved their home, and unlike most couples, they would live in that same home for the rest of their lives. Most couples look around some before settling on their forever home. Others moves several times before really finding one that suits them. Not Aunt Evelyn and Uncle George. The knew what they wanted, and they never waivered. Theirs was a sweet forever home, where the couple that lived there were forever in love. Happy birthday in Heaven Uncle George. We love and miss you very much.