After the Japanese attacked Pearl Harbor, the people of the United States were justifiably nervous about the Japanese American citizens. Many of these people had family in Japan, and their loyalty was in question. No one felt safe, so on February 19, 1942, just 10 weeks later, President Franklin D Roosevelt signed Executive Order 9066, authorizing the removal of any or all people from military areas “as deemed necessary or desirable.”

The feeling of panic that had been simmering since the attack wasn’t going away when it came to the Japanese, or the Japanese Americans, so the military defined the entire West Coast, home to the majority of Americans of Japanese ancestry or citizenship, as a military area. What began as a plan to protect the military areas, quickly escalated, and by June, more than 110,000 Japanese Americans were relocated to remote internment camps built by the United States military in scattered locations around the 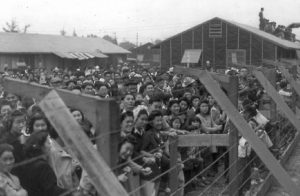 country, where they would remain for the next two and a half years. Many of these Japanese Americans endured extremely difficult living conditions and poor treatment by their military guards. It wasn’t what we would expect of our own military, but it was a tense time. It almost seemed like “guilt by association” or in this case, by race. They were Japanese, and that made people wary of them…and no one was in the mood to listen to their side.

The internment of these loyal Japanese Americans was, at the very least, unfair, and at worst, just short of criminal. It was only short of criminal because it was approved by the President of the United States. Finally, after two and a half years, United States Major General Henry C Pratt issued Public Proclamation No. 21, declaring that, effective January 2, 1945, Japanese American “evacuees” from the West Coast could return to their homes. The nightmare was over. Of 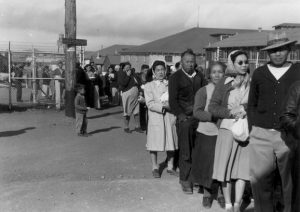 course, being over doesn’t mean that everything went immediately back to the way it was before. These people had to find new jobs and homes, because their jobs, and possibly their homes, were no longer there for them to return to.

During the course of World War II, ten Americans were convicted of spying for Japan, but not one of them was of Japanese ancestry, which is disgusting…not that no Japanese Americans were part of that, but that any American would betray their country in this way. In 1988, President Ronald Reagan signed a bill to recompense each surviving internee with a tax-free check for $20,000 and an apology from the United States government.