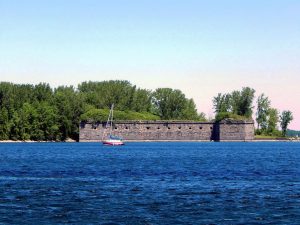 War is a serious matter, but that does not mean that mistakes can’t be made that are really funny when you think about them. After the War of 1812, the United States government was understandably concerned about British ships having access to US borders. The decision was made to built a fort on the border of New York and Canada. It was a good plan that, in the end, had just one flaw.

This plan might have brought into existence, the first American fort, had it not been for one minor detail. The fort was intended to be called Fort Montgomery, and was to be located at the northern end of Lake Champlain. That was all well and good, but there is a moral to the story. “Before you build, make sure your surveyors know what they’re doing.” Construction was begun on the first fort at this location, an octagonal structure with 30 foot high walls, in 1816 to protect against an attack from British Canada such as that which led to the Battle of Plattsburgh in 1814. In July 1817, President James Monroe visited the incomplete fortification and the adjacent military reservation known locally as “the commons.”

This might have been a triumphant visit, however, due to an earlier surveying error it was later found that this first fort was inadvertently built on the Canadian side of the border, resulting in its sometimes being better known as “Fort Blunder.” Of course, that was not its real name, and in fact the fort was never officially named. I suppose the reality is that the United States didn’t have the right to name the fort, because it wasn’t on US land. Nevertheless, the fort was named…unofficially. It became Fort Blunder, because that is exactly what it was. A colossal blunder!!

No one realized the problem with the fort at first. Two years and $275,000 after construction of the fort began, surveyors discovered a problem: The fort was being built on the wrong side of the border. Joseph Totten, later chief engineer of the US Army, supervised construction of the octagonal, 30 foot tall structure. It was to have 125 cannons, and any British ship sailing past would come under heavy fire. Under the Treaty of Paris, the 45th parallel marked the border between New York and Quebec. Therefore, the fort designed to protect the United States from Canada was in…Canada!! All work stopped on the fort, and the heretofore unnamed citadel earned the nickname Fort Blunder.

For the next 20 years, the abandoned fort was subjected to looting. The stones from the fort were taken away

to be used for homes, shops, and meetinghouses. In the end, the United States fixed the location problem not by moving the fort, but by moving the boundary line. In the 1920s, the United States sold Fort Montgomery at auction. In 1983, Victor Podd, a Montreal shipping magnate, bought it. He offered part of the property to New York State for a historic site, but New York didn’t want it. I guess it wouldn’t make sense to make a historical site out of a mistake. After Podd died in 1999, his sons inherited Fort Montgomery. They tried to sell it on eBay and actually got a bid for $5 million, but the deal fell through. The owners still want to sell Fort Montgomery. You can buy it for less than $1 million.

One Response to A Colossal Blunder