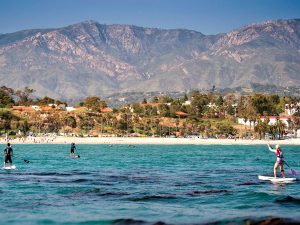 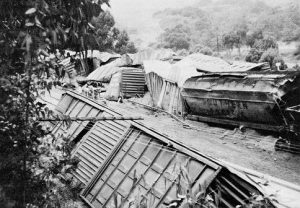 Santa Barbara, California is a picturesque area with mountains to the east, ocean to the west, and palm trees everywhere. It seems like a perfect kind of paradise, and most of the time it probably is, but on June 29, 1925, many things changed. That morning, a magnitude between 6.5 and 6.8 earthquake hit the area of Santa Barbara. Although no foreshocks were reportedly felt before the mainshock, a pressure gauge recording card at the local waterworks showed disturbances beginning at 3:27am, which were likely caused by minor foreshocks. Then, at 6:44am the mainshock occurred, lasting 19 seconds. The earthquake’s epicenter was in the Pacific Ocean off the coast of Santa Barbara, in the Santa Barbara Channel. It is thought that the fault on which it occurred is an extension of the Mesa fault or the Santa Ynez system. The earthquake was felt from Paso Robles in San Luis Obispo County to the north to Santa Ana in Orange County to the south and to Mojave in Kern County to the east. Major damage occurred in the city of Santa Barbara and along the coast, as well as north of Santa Ynez Mountains, including Santa Ynez and Santa Maria valleys.

Those were 19 seconds that started a disaster of epic proportions. The earthquake was immediately complicated when the dam broke and water mains burst. The earthen Sheffield Dam had been built near the city in 1917. It was 720 feet long and 25 feet high and held 30 million gallons of water. The soil under the dam liquefied during the earthquake and the dam collapsed. This was the only dam to fail during an earthquake in the United States until the Lower San Fernando Dam failed in 1971. When it burst, a wall of water swept between Voluntario and Alisos Streets destroying trees, cars, three houses and flooding the lower part of town to a depth of 2 feet. The rushing water caused some areas of the city to be flattened. People as far away as San Francisco and Los Angeles felt the earthquake, reporting millions of dollars worth of damage across California. The earthquake was even felt in other states as far away as Montana, who reported more damage. The earthquake destroyed the historic center of the city, with damage estimated at $8 million in 1925, or about $117 million today.

Thirteen people lost their lives that day, but it may have been far worse without the actions of three heroes. Those heroes shut off the town gas and electricity preventing a catastrophic fire. Most homes survived the earthquake in relatively good condition, with the exception of the fact that every chimney in the city crumbled. The downtown area of Santa Barbara was in complete ruins. On State Street, the main commercial street, only a few buildings remained standing after the earthquake. The City Cab building, The Californian, and Arlington garages…all large and fully occupied parking structures…collapsed. They were full of cars. Many other vehicles were crushed in the downtown area too. At least one death was the result of the San Marcos building crushing a car, as walls of buildings fell onto cars parked there. In the 36 block business district, only a few structures were not substantially damaged. Many had to be completely demolished and rebuilt. The façade of the church of the Mission Santa Barbara was severely damaged and lost its statues. Many important buildings, including hotels, offices, and the Potter Theater, were lost. The courthouse, jail, library, schools, and churches were among the buildings sustaining serious damage. Concrete curbs buckled in almost every block in Santa Barbara. Pavement on the boulevard along the beach was displaced by about a foot to a foot and a half, but oddly, the pavement in the downtown area was virtually not damaged.

Railroad tracks were damaged in several places between Ventura and Gaviota. In particular, a portion between Naples and Santa Barbara was badly damaged. Seaside bluffs fell into the ocean, and a slight tsunami was felt by offshore ships. The town was completely cut off from telephone and telegraph, and the only source of news was from shortwave radios. Because the gas was shut off, there was an absence of post-earthquake fires. This allowed scientists to study earthquake damage to various types of construction. That was a rare things for the scientists. The American Legion and the Naval Reserves from the Naval Reserve Center Santa Barbara patrolled the streets looking to inhibit looters of the damaged businesses and homes. Additional fire and police personnel arrived from as far as Los Angeles to assist the sailors and soldiers in maintaining order. Three strong aftershocks occurred at 8:00am, 10:45am, and 10:57am, but without further damage. There were many smaller shocks that continued throughout the day. An aftershock on July 3 caused additional cracked walls and damaged chimneys. Since downtown Santa Barbara suffered so much damage, there was a large-scale construction effort in 1925 and 1926 aimed at removing or repairing damaged structures and constructing new buildings. This new construction completely altered the character of the city center. Before the earthquake, a considerable part of the center was built in the Moorish Revival style. After the earthquake, the decision was made to rebuild it in the Spanish Colonial Revival style. This effort was undertaken by the Santa Barbara Community Arts Association, which was founded in the beginning of the 1920s and viewed the earthquake as the opportunity to rebuild the city center in the unified architectural style. As a result, many buildings later 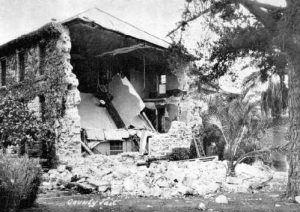 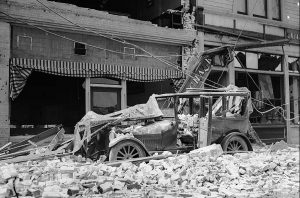 listed on National Register of Historic Places were designed in the late 1920s, among them the Santa Barbara County Courthouse and the front of the Andalucia Building. Building codes in Santa Barbara were also made more stringent after the earthquake demonstrated that traditional construction techniques of unreinforced concrete, brick, and masonry were unsafe and unlikely to survive strong quakes.

One Response to Santa Barbara Shaking