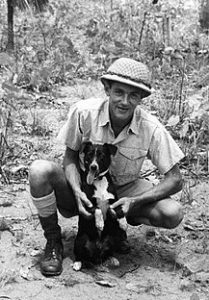 Gunner was a stray male Kelpie, born in August 1941, who became notable for his reliability to accurately alert Allied Air Force personnel that Japanese aircraft were approaching Darwin during the Second World War. Gunner was six months old when he was found whimpering under a destroyed mess hut at Darwin Air Force base where he suffering a broken leg on February 19, 1942, following the first wave of Japanese attacks on Darwin.

Gunner was taken to a field hospital, but the doctor insisted he could not fix a “man” with a broken leg without knowing his name and serial number. The doctor repaired and plastered his leg after the air force personnel replied that his name was “Gunner” and his number was “0000”. Gunner entered the airforce on that day. It might have been unofficial, but only is the way he was “drafted.” Gunner’s Air Force career was very real. Leading Aircraftman Percy Westcott, one of the two airmen who found Gunner, took ownership of him and became his master and handler. Gunner was badly shaken after the bombing and quite skittish, but being only six months old he quickly responded to the attention of the men on base.

About a week later, Gunner first demonstrated his remarkable hearing skills. The men were working on the airfield, when Gunner became agitated. He started to whine and jump. A little while later, the sound of approaching airplane engines was heard by the airmen. Suddenly, a wave of Japanese raiders appeared in the skies above Darwin and began bombing and strafing the town. Somehow…Gunner knew. Two days later, Gunner became agitated again, and not long afterwards came another air attack. In the months that followed, the same pattern played out every time an attack occurred. Long before the sirens sounded, Gunner would become agitated and head for shelter. Because of Gunner’s amazing hearing he was able to warn air force personnel of approaching Japanese aircraft up to 20 minutes before they arrived and before they showed up on the radar. Gunner was never agitated when he heard Allied planes taking off or landing….just the enemy aircraft. Somehow Gunner could differentiate the sounds of Allied and enemy aircraft. He was so reliable that Wing Commander McFarlane gave approval for Westcott to sound a portable air raid siren whenever Gunner’s 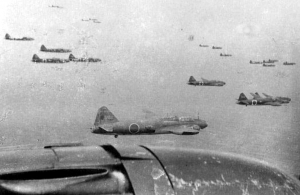 whining or jumping alerted him. Before long, there were a number of stray dogs roaming the base. McFarlane gave the order that all dogs be shot, with the exception of Gunner. They couldn’t afford any distractions.

Gunner became such a part of the air force that he slept under Westcott’s bunk, showered with the men in the shower block, sat with the men at the outdoor movie pictures, and went up with the pilots during practice take-off and landings. When Westcott was posted to Melbourne 18 months later, Gunner stayed in Darwin, looked after by the RAAF butcher. It is unknown what happened to Gunner after the war, but he was a most amazing dog.