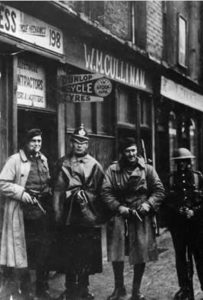 In 1536, Henry VIII decided to conquer Ireland and bring it under crown control. From that time forward until 1920, all of Ireland was a part of the British Isles. The British Isles is a geographical term which includes two large islands, Great Britain and Ireland, and 5,000 small islands, most notably the Isle of Man which has its own parliament and laws. Today, only Northern Ireland remains, as part of the United Kingdom.

For the most part, the Irish War of Independence, also called the Anglo-Irish War, was a guerrilla conflict and most of the fighting was conducted on a small scale by the standards of conventional warfare. Although there were some large-scale encounters between the Irish Republican Army and the state forces of the United Kingdom. The Auxiliary Division of the Royal Irish Constabulary (ADRIC), generally known as the Auxiliaries or Auxies, was a paramilitary unit of the Royal Irish Constabulary (RIC) during the War. It was set up in July 1920 and made up of former British Army officers, most of whom came from Great Britain. Its role was to conduct counter-insurgency operations against 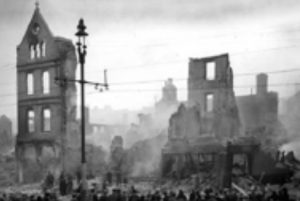 the Irish Republican Army (IRA). The Auxiliaries became infamous for their reprisals on civilians and civilian property in revenge for IRA actions, the best known example of which was the burning of Cork city in December 1920. The Black and Tans officially the Royal Irish Constabulary Special Reserve, was a force of temporary constables recruited to assist the Royal Irish Constabulary (RIC) during the war. The force was the brainchild of Winston Churchill, then British Secretary of State for War. Recruitment began in Great Britain in late 1919. Thousands of men, many of them British Army veterans of World War I, answered the British government’s call for recruits.

The war continued on and by November 1920, around 300 people had been killed in the conflict. Then, there 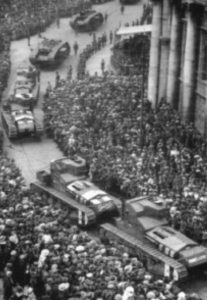 was an escalation of violence beginning on Bloody Sunday, November 21, 1920, fourteen British intelligence operatives were assassinated in Dublin in the morning. Then, in retaliation, the afternoon the RIC opened fire on a crowd at a Gaelic football match in the city, killing fourteen civilians and wounding 65. A week later, seventeen Auxiliaries were killed by the IRA in the Kilmichael Ambush in County Cork. In retaliation, the British government declared martial law in much of southern Ireland. The centre of Cork City was burnt out by British forces on December 10, 1920. Violence continued to escalate over the next seven months, when 1,000 people were killed and 4,500 republicans were interned. Much of the fighting took place in Munster (particularly County Cork), Dublin and Belfast, which together saw over 75 percent of the conflict deaths. Violence in Ulster, especially Belfast, was notable for its sectarian character and its high number of Catholic civilians.