Fastest Gun In The Dakotas

Deadwood, South Dakota maybe started out as an illegal town, but once it was established, there came a need for things like mail, supplies, and transportation, the latter of which brought the need for a stagecoach. The biggest problem with the stagecoach was the fact that the lawless element in the area thought it would be an easy target for robbery. The stagecoaches became a ride for the very brave. Soon it became apparent that the stagecoaches were going to need some protection.

Daniel “Boone” May was born in Missouri in 1852. Going by the name of “Boone,” he was the son of Samuel and Nancy May, the seventh of nine children. Later, he moved with his family to Bourbon County, Kansas, where his father worked as a farmer. In 1876, “Boone” and his older brother moved to Cheyenne, Wyoming, where they worked in the freight business. During this time, the Black Hills were crawling with road agents and hostile Sioux Indians.It was a dangerous time to be working along the roadways in that area. Nevertheless, May did very well there, and he decided to buy a ranch between the Platte River and Deadwood by the end of that year.

“Boone’s” bravery and work ethic soon came to the attention of the stagecoach service, and he was soon recruited as a shotgun messenger for the Cheyenne and Black Hills Stage & Express Company. He also served as the station keeper at Robbers’ Roost in Wyoming Territory. Within just a few years, “Boone” was thought to have been in at least eight shooting incidents with outlaws. Many people said that he was the fastest gun in the Dakotas. His adventures soon became well known.

One of the first hold-ups “Boone” was involved in was in August, 1877, when a Deadwood Coach was intercepted at Robber’s Roost. On this occasion, even though “Boone” wanted to fight it out, he decided to lay down his weapons, because a woman and child were in the coach. The robbers made away with the passenger’s money, weapons and personal property. While they lost their things, I’m sure they decided that it was best to walk away with their lives. A short time later, “Boone” ran into one of the bandits, a man named Prescott Webb, in Deadwood and within no time, gunfire erupted between the two men. Though “Boone” was hit in the left wrist, he returned fire as Webb jumped on a horse to make his getaway. “Boone’s” shots hit Webb in the shoulder, and the horse several times, bringing it down. Webb was quickly arrested by Sheriff Seth Bullock and later that day, Webb’s companions who had aided in the robbery, were also arrested.

In 1878, stagecoaches known as “treasure coaches” were running regularly between Deadwood and Cheyenne. Their cargo was strong boxes filled with gold, as well as the U.S. Mail. These “treasure coach” stages often became the target of bandits, and after one of these coaches was held up on July 2, 1878, the U.S. Postal Service appointed a number of special agents to bring the outlaws to justice. “Boone” and ten other men were soon appointed as U.S. Deputy Marshals and equipped with good horses and ammunition. One of “Boone’s” first encounters with bandits as a U.S. Deputy Marshal occurred on the night of September 13, 1878. He and another messenger were trailing a Cheyenne bound coach which was approached by bandits near Old Woman’s Creek in the Wyoming Territory. “Boone” and another deputy, Zimmerman surprised the outlaws and shooting erupted. “Boone” wounded one bandit named Frank Towle and the others fled empty handed. Leaving their Towle wounded on the ground, the two messengers went after the other bandits but were unable to capture them. When they returned to the robbery site, Towle was gone.

On September 26, 1878, when “Boone” and other messengers were waiting to escort a coach at Beaver Station on the Wyoming-Dakota border, but the stage failed to show up. They went in search of the coach, and met another messenger who told them it had been robbed and a passenger killed. “Boone” quickly joined a posse to go after the outlaws, but they escaped. The following month, “Boone” learned of the hiding place of a robber named Archie McLaughlin and quickly went after him and his gang. Capturing them north of Cheyenne, the outlaws were sent under guard to Deadwood on the northbound coach. Unfortunately, the stage never make it, because on November 3, 1878, it was stopped by vigilantes who hanged Archie McLaughlin and another man named Billy Mansfield. The next month, “Boone” was in a posse that brought in a robber named Tom Price. The bandit tried to escape, and was wounded, and then was brought in. Late in 1879, “Boone” was sent to assist Special Agent William Llewellyn in the capture of a mail robber named Curley Grimes. They tracked the outlaw 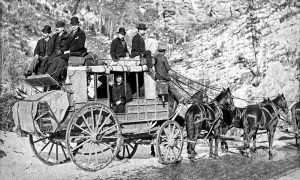 to Elk Creek, located halfway between Rapid City and Fort Meade where they arrested him. That night, as the group neared Fort Meade, Grimes attempted to escape and was shot and killed by “Boone” and Llewellyn. By this time, “Boone” had made such a reputation for himself that he became a target for many of the outlaws who repeatedly tried to assassinate him, unsuccessfully. “Boone” also worked as a messenger for the Black Hills Placer Mining Company in the summer of 1880, and was said to have killed at least one robbers during this time. A short time later, “Boone” resigned from the company and left the Black Hills. He turned up in Santiago, Chili in 1883. He shot an army officer in 1891, he fled to Brazil. He died of yellow fever in Rio de Janeiro in 1910.

One Response to Fastest Gun In The Dakotas