In A Small Town 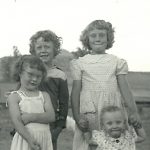 My mother-in-law, Joann Schulenberg was the eldest of her parents three living children. Her older brother Everett passed away at birth. The second living child was Linda Cole, who was born 15 years after her older sister. Following Linda, youngest sister, Margaret was born three years later. It was almost like having two separate families, because Joann was practically grown up by the time her younger siblings arrived. In reality, Linda and Margee grew up with nieces and nephews, some of whom were closer in age to them than their own sister was, and there sister was almost like a second mother to them.

Linda grew up and married Bobby Cole on December 29, 1965. Their marriage was blessed with a daughter, Sheila and a son, Patrick, both of whom are married and have children of their own now. Linda and Bobby ran a hotel in Kennebec, South Dakota for most of the years while their children were growing up. They loved the small town of Kennebec, and the social scene in the area. For a number of years, they were a part of a square dance club. I remember all their great dance clothes, and how much they loved being part of that club. I think it was the most fun they had in a long time. 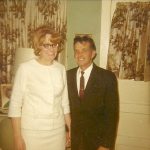 Unfortunately, the economy in Kennebec wasn’t doing too well, and after they lost their hotel to a fire, they decided that it was time for a change. The decided to move to Winnemucca, Nevada. they thought that the gambling might be just the ticket for them. The both found work in the casinos there, and dabbled in gambling on their time off. They really enjoyed their lives in Winnemucca. They were in a warmer climate, and far away from the harsh South Dakota winters. They would live out the remainder of their lives in Winnemucca. Bobby passed away on May 30, 2014, of cancer. After his passing, Linda seemed content to stay in Winnemucca, until her passing on September 22, 2016 of a heart attack. We miss them both very much. Today would have been Linda’s 71st birthday. Happy birthday in heaven Linda. We love you.