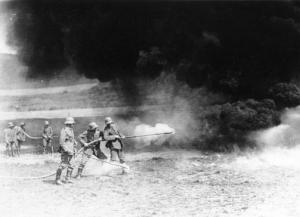 Over the centuries of life on Earth, there have been numerous wars, and numerous weapons of warfare. Yet, few could bring fear to the heart of an infantryman quicker than the Flammenwerfer. Developed by the Germans during World War I, the Flammenwerfer…or Flamethrower, in English…once lit could throw a steady stream of flames 20 to 30 feet in front of it. For the men on the ground, this meant one of two things. They could run…abandoning the relative safety of their foxhole, usually with the result of being shot down by the enemy, or they could stand their ground and be incinerated. It wasn’t much of a choice really, and most ran in the hope of escaping the machine gun fire that would undoubtedly follow the flamethrower. It was a situation of instant death…no matter which choice a soldier made…not to mention the fact that every fiber of a soldier’s being and training told them to stand their ground. This weapon took much of it toll on the soldier’s sense of bravery.

The Flammenwerfer was developed in 1915 by the Germans, and first used in battle against the Allied forces on this day, July 30, 1915 at the Battle of Hooge. Eleven days before that battle, British infantry had captured the German occupied village of Hooge, located near Ypres in Belgium, by detonating a large mine. Using the flamethrowers, along with machine guns, trench mortars and hand grenades, the Germans got their positions 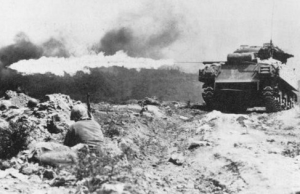 back on July 30, 1915. They broke through enemy front lines with ease, pushing the British forces back to their second trench. Only a few men were lost to actual burns, but a British officer was heard to explain that the weapons had a great demoralizing effect, and when added to the assault of the other powerful weapons, they proved mercilessly efficient at Hooge. I suppose that is true. I can think of few things more demoralizing for a soldier than running from your position in fear. Soldiers don’t take kindly to fear…or running away.

During World War I, the Germans were the only ones to use such a weapon, and not because it was difficult to make. So, why didn’t the Allies us it too? It was one of the great puzzles that emerged from World War I. Why? The British made three attempts with larger, more unwieldy prototypes: the smallest one was equal in size to the German Grof, which the enemy had almost abandoned by 1916. The French were more persistent, and by 1918 had at least seven companies trained in using flamethrowers, and still the use of the weapon never progressed to the same level as that of the German army.

By World War II, however, the flamethrower was the most dramatic hand weapon used by any Army and the most effective for its purpose. But it was during the 20th century that engineers and scientists placed flames 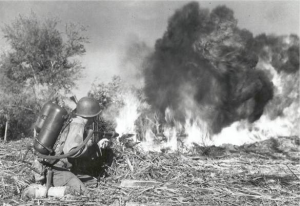 under advanced technological control in an effort to make flamethrowers portable, reliable and reasonably safe…for the user anyway. Prior to that the words “friendly fire” had a second meaning in that flamethrowers could kill the operator while he was doing his best to kill the enemy with it. The result of this new technology was a device with as much psychological impact as it’s lethality impact. That was the chief reason why the United States, Great Britain and other world powers used the flamethrower from World War I through the Vietnam War. Even today, Russia still has flamethrowers in its inventory. I guess it is an important weapon, but for most of us, I think that just the thought of using it on someone would make us seriously ill.

One Response to The Flammenwerfer