When I first met Bob’s Aunt Esther, we had not been married very long, and unfortunately for Bob, he had made the mistake of assuming that I knew how to cut hair. Well, in reality, I did, but there is a vast difference between cutting my sisters’ long, one length hair, and his short and in need of a tapered look hair. Needless to say, I cut his hair at one length most of the way around and a bit shorter above the ears and shorter still on his forehead, but still no tapering. It was kind of a disaster…and it was right before our wedding…Ugh!! Bob was a god sport about it…after the initial shock and argument over what in the world I had been thinking. I told him I didn’t know how, but he thought his mother would cut it too short, so he was left with me. His mistake, not mine…right!! 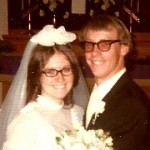 That summer, we went up to Forsyth, Montana to visit Bob’s grandparents, Vina and Walt Hein, who are his Aunt Esther’s parents. Bob’s hair, unfortunately for him, is rather slow growing, and the summer still found his hair not looking too great. Since Esther was a cosmetologist, Bob decided to play it safe and have her cut his hair…still rubbing it in a bit that I had butchered it the last time he let me near it. The situation was quickly getting ready to turn into an argument, when Esther offered to teach me how to cut his hair. It was the best thing she could have done, because over the years, it has saved us untold amounts of money on haircuts for Bob…not to mention years of embarrassment about how awful it really looked.

It wasn’t that I didn’t know how bad his hair looked after I cut it, but rather it was the fact that there was 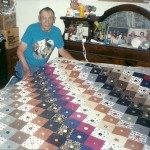 nothing I could do about it, and every time he looked in the mirror to comb his hair, there it was…a constant reminder. It got easier as it got longer, but he wasn’t going to let me touch it. Esther taking the time to not only cut it well, but to show me how to cut it right, was a definite saving grace for me, because now I can cut it and do it right.

Of course, cutting hair isn’t the only thing Esther is talented at. She is a great seamstress, and makes amazing quilts as well. Her paintings have graced several homes that I know of, including mine. Esther is a woman of many talents, and I’m glad she has shared some of them with me. Today is Esther’s birthday. Happy birthday Esther!! Have a great day!! We love you!!

One Response to Many Talents