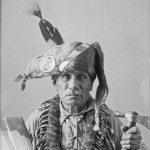 2 Responses to Adopted By An Indian Chief