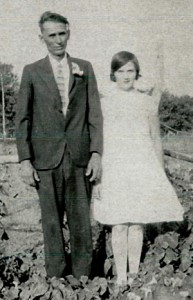 When my grandparents were young, it was not unusual for there to be bigger age differences between a man and his wife. There was a 16 year age difference in my grandparents ages. Grandma was a mere 18 years of age when she became a bride.  I am reminded of a country song called “Love Like Crazy” sung by Lee Brice, in which a couple is told that they are crazy to marry so young. I don’t know if my grandmother’s parents felt that way or not, but that rarely makes a difference to the couple in love anyway. The funny thing about the song is that it ends up pointing out that if a couple “loves like crazy” they can beat the odds and stay together.  That song always reminded me of my grandparents, and I’m not sure exactly why. Maybe because Grandma was so young. I’m sure you will agree that she looked like a little kid.  And while my grandfather was 16 years older, he looked very young too.

For my grandparents, age made no difference. They would have been in love if they were the same age or 16 years apart. You could always hear it in their voices, and see it in their eyes. There is another song that also reminds me of my grandparents. It is “I Only Have Eyes For You” by Frank Sinatra. That is how my grandparents were. From the moment they met, they only had eyes for each other. And even after 50 years together, they still have that look in their eyes. They always would. They just looked so in love.

Their marriage would last for 53 years, until Grandpa went home to be with the Lord in 1980, but the love remained for all time. They were blessed with 9 children, many grandchildren, great grandchildren, and great great grandchildren…too many to easily count. Most of their family and extended family has stayed close to home, making ours one 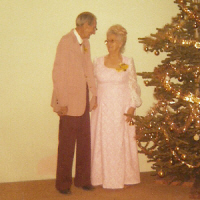 of the largest in Casper, numbering close to or over 300. And of course, some of my grandparents’ brothers and sisters are here too, making for an even larger family.

The love that began when my grandparents first laid eyes on each other, has grown into a love so big and so beautiful, that it could not be contained in just two people, and so it has blossomed in their children, grandchildren, great grandchildren, and great great grandchildren. It is a love for all time, that reminds me of yet another song called, “Little Houses” by Doug Stone. My grandparents may not have been rich in worldly things, but their lives were so rich in love, that no one would have ever been able to tell if they lacked money. They were so blessed, and they loved like crazy! Does it get any better than that?