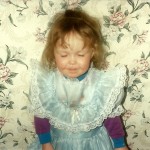 Sometimes, I look at a picture, and a story seems to emerge that may or may not be reality, but it sure seems to be the case. They say a picture is worth a thousand words, but maybe pictures are made up of a thousand words. As I looked at this picture of my niece, Lacey, I could see that she had been playing dress up. The frilly blue dress, over the long sleeved T-shirt gave that away. I could also see that she had been eating something, candy or something like that, because there are spots on both dress and face that gave away her little secret.

What I couldn’t say for sure in this picture is whether or not she was sleeping or had she just blinked at the moment the photo was taken. I suspect though that she was not sleeping, since there seems to be a hint of a smile on her little face. She might have blinked, but it occurred to me that maybe she was playing hide and seek. That would make perfect sense to me.

When Lacey was a little girl, she used to love playing these kinds of games, and most especially dress up with her cousin Siara. They were as close as sisters or at the very least, and maybe even more so, they were best friends. It didn’t matter that they were in different grades as school…Lacey is 6 months older than Siara. They still hung out together at school and after school. They also spent the night together as much as possible, and since Siara is my sister, Cheryl’s granddaughter, they often stayed at my mom’s with Mom, Dad, and Cheryl. They always had a great time together, often well into the night, giggling 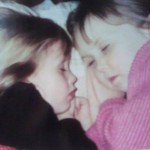 and talking in bed. Of course, that meant that getting the two of them up for church the next day was…well, a huge effort.

Lacey graduated last year, and Siara this year, and both are going into the next phases of their lives. Lacey is studying to be a Cosmetologist, and Siara is just starting her first year of college, and doesn’t know exactly what she wants to do yet, but I know that both these girls will be highly successful and will always make us all proud of them. No matter where life takes these girls, we will always love them very much, and we will never forget the little cuties they were…in their frilly dress up clothes and makeup.