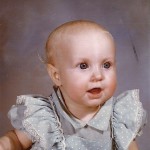 4 Responses to Never A Dull Moment