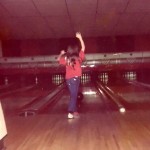 Since Bob and I bowled from the time Amy was two years old, it just naturally followed the our girls would bowl on a league as kids. They started bowling when they were 5 years old. At that time, the league they were on needed a coach, so since I was there all the time anyway, I was elected. I took a class for 3 hours on a Saturday morning, and the deal was sealed.

We had some interesting moments during those early years. Corrie, had been bowling about a year when Amy started, and of course, she was an expert. One day she was bowling and doing ok, when she went up for her turn and threw her ball. It went into the gutter before it even got to the dots, much less the arrows on the lane. But, that didn’t make any difference to Corrie. She turned around and put her hands on her hips, looked me square in the eye, and said, “That should have been a strike!!” Do you think she was around bowlers much? Corrie would learn what really should have been a strike as time went on, but we laughed about that first use of bowling terminology for quite some time.

Amy had a little bit different experience however. She was pretty little at 5 years old, and isn’t very big now, but that’s another story. Her bowling ball weighed 6 pounds. 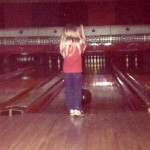 The combination of the light ball and the little girl made it difficult for her ball to do what a bowling ball should do. It would fall in the gutter half way down the lane, and stop. Someone would have to go get it and bring it back for another try. It was frustrating to her. One day, another coach who was helping, decided on the solution. He picked Amy up…ball and all, walked down the lane until she was about a foot in front of the pins, set her down and said, “Now hit ’em!” And she did. Amy would continue to struggle with the ball speed for some time, even having the pins stop the ball, but today she has made up for it. She throws one of the fastest bowling balls around.

One Response to Little Bowlers