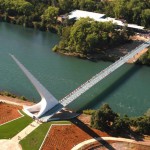 We left Reno, Nevada and headed west toward Redding, California. The morning was cool, but with the promise of getting warmer. We were so excited to go, since neither of us had ever seen the Redwoods before. We hadn’t thought of doing it, but Jim (my boss) brought it up, and when we found that it was something we would have time to do, we made the decision to go for it.

As we drove along from Reno to the California state line, the land was brown and lifeless in the late March sunlight. Just a short time out of Reno, we crossed the border into California, and it was like going from one planet to another. The air was warmer…I had to take off my jacket. Then, I noticed that everything was becoming greener and very fresh smelling. You could tell that you were in California.

The route we traveled, took us over the mountains. When we left Susanville, California, the temperature was a very comfortable 68 degrees. Then we went up into the mountains, and while the roads were clear and dry, the snow was higher than the car. The trees were a tall and green pine (or some such, since I’m no expert), but definately not Redwood…yet.

By the time we arrived in Redding, the transformation was complete. The trees had leaves, and the grass was green. The air was warm and we didn’t need a jacket when we went for a walk. We even saw the Sundial Bridge, which is a very unique foot bridge. It was such a beautiful day. Perfect really. Awww, this was it. The reason we go to a warmer climate in March…to feel the coming summer, if only for a few days.

2 Responses to The Coming Summer