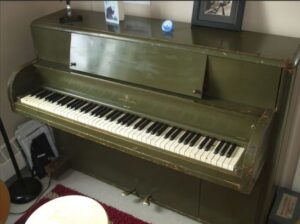 Production needs during wartime often change dramatically, and the piano industry was no exception. I suppose that such frivolous items as a piano, must go by the wayside when so many much more important things like weapons, military vehicles, and military airplanes were needed so much more. That is what you might logically think anyway. Nevertheless, you would be wrong. During World War II, the famous musical instrument company, Steinway and Sons, did stop making traditional pianos. The biggest reason for the change was because the materials they needed were shifted to the war effort. Still, the company didn’t shut down production entirely. They actually began making things that were needed for the war effort. Things like coffins and parts for military transports became the production like items of the day. It seemed a sad state of affairs for a company that had once brought so much joy and happiness to so many households and concert halls, but it had to be done, so they stepped up and did their part.

While they made many coffins and parts, strangely, Steinway was also contracted by the War Production Board 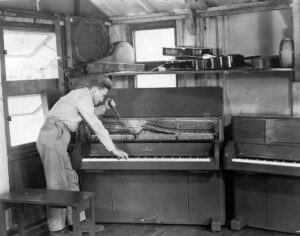 to make…pianos!! What?? The government wanted pians that could be set into battle, and when I think of shows like “MASH” with the piano that graced the “Officer’s Club,” that as it turned out, wasn’t just for officers, it makes perfect sense. What better way to boost moral than a piano that could be sent into battle. The new Steinway and Sons pianos were “small, sturdy uprights, painted olive drab and shipped by cargo vessels and transport planes to military theaters around the world.” Called “Victory Verticals” or “G.I. Steinways,” the company made about 3,000 of the pianos in 1942 and 1943. Some of the instruments were actually parachuted into camp complete with tuning tools and instructions. Now all it needed was a soldier who could play, and hopefully not just chop sticks. Others came in by Jeep on a wagon.

As the gifts made their strange arrivals, the men welcomed their arrival. Any camp that was blessed enough to receive a Victory Vertical felt an instant lift of their spirits. One US Army Private, Kenneth Kranes told his 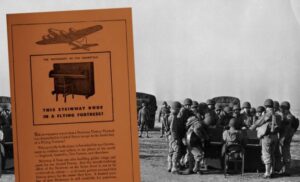 mother in a letter home from North Africa dated May 6, 1943, “Two nights past we received welcome entertainment when a Jeep pulling a small wagon came to camp. The wagon contained a light system and a Steinway pianna. It is smaller and painted olive green, just like the Jeep. We all got a kick out of it and sure had fun after meals when we gathered around the pianna to sing. I slept smiling and even today am humming a few of the songs we sang.” Who would have thought that a company so famed for its elegant musical instruments would find that quite possibly its most famous instrument would be a plain-Jane, olive-drab version of what it expected to be famous for.