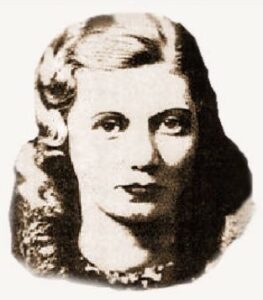 Every outlaw has their little quirks. It’s almost like they like to leave a calling card…even if it might get them caught. Some people think they do it because they want to get caught. I suppose the reasons for those little “calling cards” were as varied as the people using them. During the depression-era, there was an outlaw named Edna “Rabbits” Murray. She and her partner, Volney Davis were robbers, which wasn’t so strange for that or any other era, but Murray was…quirky!! She was actually known to the press as the “Kissing Bandit” due to her habit of kissing male robbery victims. While odd, I guess it’s better than shooting them.

The media saw one thing, but the underworld saw something else. Murray was known as “Rabbits” for her skill as an escape artist. Murray and her boyfriend, Davis, chose banks as their target of choice, robbing a series of banks before she was finally arrested. Murray managed to escape in early May 1927, after which she and her boyfriend got right back into business. She was then arrested in a Chicago, Illinois raid. For this crime, she received a 25-year prison sentence at Jefferson City, Missouri. Once again, Murray managed to escape in November 1931, when she and a couple of other inmates climbed over a fence. Their short-lived freedom ended when they were quickly apprehended and returned to prison. The botched escape didn’t deter Murray, who was very determined, and she escaped again on December 13, 1932. Murray rejoined her boyfriend, and they continued their crime spree before finally settling in Aurora, Illinois.

Settling down in Aurora did not mean the end of her crimes or her troubles. On April 23, 1934, outlaws John Dillinger, Homer Van Meter, and John “Red” Hamilton, all friends or cohorts of the couple, arrived at their home seeking a place to hide out after being nearly captured by the FBI near Rhinelander, Wisconsin. While at their home, John Hamilton, who had been badly wounded during the shootout with the FBI, died of his injuries. For 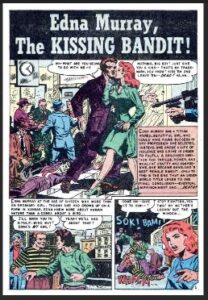 Murray, trouble just didn’t seem to end, and with the FBI hot on her tail, she was off and running again. She was recaptured on January 22, 1935. This time, she was indicted along with several members of the Barker-Karpis Gang for a conspiracy to kidnap wealthy Minnesota banker Edward Bremer in January 1934. Once again, Murray ran. She went to Wichita, Kansas with Jess Doyle, a member of the Barker-Karpis Gang and her sister’s boyfriend. She still couldn’t hide. She was arrested on February 7, 1935. Following that arrest, she was convicted, along with several others, in the kidnapping conspiracy and sentenced to federal prison on May 6, 1935. While in prison, she marketed her persona as a “gangster’s moll” in a number of newspapers and journals, writing articles with titles such as “I Was a Karpis-Barker Gang Moll”. She finally stayed put, and she was paroled from the Women’s Prison at Jefferson City, Missouri, on December 20, 1940. From there Murray moved to California and apparently went straight (or at least retired from her life of crime) or never got caught again, anyway. She died in San Francisco in 1966. Cause of death isn’t known, or not publicized, but she is buried in San Francisco.