The Charisma Of Sitting Bull 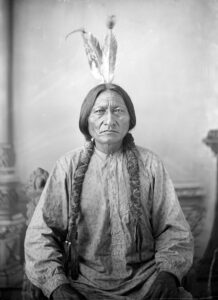 Sitting Bull was a Hunkpapa Lakota leader who led his people during years of resistance against United States government policies. The Hunkpapa Lakota is a branch of the Sioux tribe. Sitting Bull was a rather charismatic person, and people were willing to follow him because of it. He was a rather mysterious historical figure. He was not impulsive, nor was he calm. Sitting Bull had a strange personality. He was most serious when he seemed to be joking. He also possessed the power of sarcasm, and he used it to his advantage. These things are likely what made him a good leader for his people.

Sitting Bull was a man given to having visions, and before the Battle of the Little Bighorn, he had a vision in which he saw many soldiers, “as thick as grasshoppers,” falling upside down into the Lakota camp. The Hunkpapa Lakota people took the vision as a sign of a major victory in which many soldiers would be killed…and maybe it was. Just three weeks later, on June 25, 1876, the confederated Lakota tribes, along with the Northern Cheyenne tribe, defeated the 7th Cavalry under Lieutenant Colonel George Armstrong Custer, decimating Custer’s battalion. The battle and it’s timing seemed to bear out Sitting Bull’s prophetic vision. Again, Sitting Bull’s leadership inspired his people to 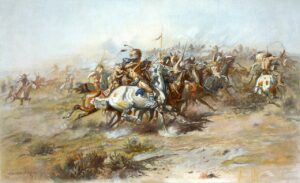 Of course, the United States government immediately sent thousands more soldiers to the area, in response to the battle. Any Indians who were in small groups or alone were a target, as were villages of peaceful Indians. Many were forced to surrender over the next year, but Sitting Bull refused to. In May 1877, he led his band north to Wood Mountain, North-West Territories, which is now Saskatchewan. Canada. Sitting Bull stayed in that area until 1881, at which time he and most of his band returned to US territory and surrendered to US forces. 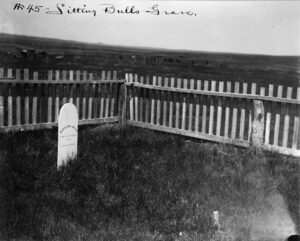 Bill’s Wild West show for a while, before returning to the Standing Rock Agency in South Dakota. That became one of the biggest mistakes Sitting Bull would ever make. Due to fears that he would use his influence to support the Ghost Dance movement, Indian Service agent James McLaughlin at Fort Yates ordered his arrest on December 15, 1890. Sitting Bull’s followers refused to go quietly, and in the struggle with police, Sitting Bull was shot in the side and head by Standing Rock policemen Lieutenant Bull Head and Red Tomahawk. His body was taken to nearby Fort Yates for burial. In 1953, his Lakota family exhumed what were believed to be his remains, reburying them near Mobridge, South Dakota, near his birthplace.