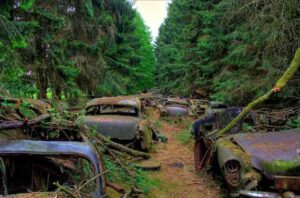 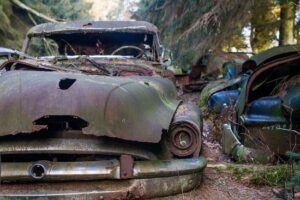 Just outside the little village of Chatillon in Southern Belgium, on top of a tree covered hill, hidden from view, there was a “car cemetery” filled with cars that once belonged to the US servicemen stationed there. No one really knows how the soldiers came to obtain the cars exactly, especially since they were mostly American made cars…meaning they must have been shipped over to Belgium. So, the soldiers who were stationed in Belgium during World War II somehow had cars to drive to get around while they were serving over there.

Then, once the war was over, the soldiers returned to the United States. I suppose that bringing the vehicles over happened a few at a time, but shipping them back would be a massive undertaking, so it was decided to leave them behind. To me, it would seem like they should have given the cars away. At least that way, people in the area could have a car, when they might not have been able to afford one any other way. Nevertheless, that was not how it was done. The officers in charge decided to leave them in the country and parked them all up at the top of a hill, which was hidden from view. It was left up to the individual soldier whether or not they wanted to have their car shipped to them once they returned home, at their own expense. Not one of them decided to retrieve their car. These days the way things took place in the end, would have very likely cause an international uproar because they basically littered the landscape with junk cars. Of course, they weren’t junk at the time, and I suppose the people of the area could have taken the cars as abandoned. I’m not sure how they would have run when it was finally determined that they were abandoned, and maybe it was decided that it would cost too much. That may be the reason that none of the soldiers ever claimed their vehicles…a cost too heavy and no help in sight.

After many years, the forest was in the process of making very slow work of returning the cars to nature. The stories about the “Car Cemetery” persisted, and possibly complaints too. It was said that American-made cars had been brought by American and Canadian NATO troops to a mechanic in Châtillon. One by one, the cars were driven up a hill, parked, and somehow hidden from the outside world. Eventually, local people added their own old cars too. Possibly the mechanic was to keep them for the soldiers, but after France’s 1966 withdrawal from NATO, he was left “holding the bag” as it were, with hundreds of scrap cars that gradually became overgrown until a television documentary brought the “illegal dump” to light. Finally, the cars were removed and crushed in October 2010.

To date, some of the cars are said to still be there. At one point there was not one but four car graveyards 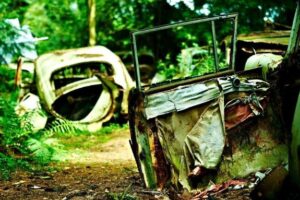 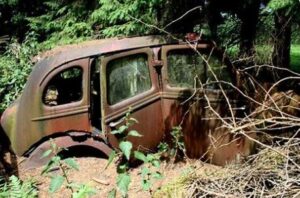 around the village of Chatillon with as many as 500 vehicles. The ones that remain today are only a fraction of the original number of cars. A lot of cars and their parts were stolen by the locals and international car collectors, so maybe some of them have been restored before they were completely lost. Either way, it was a very strange situation.